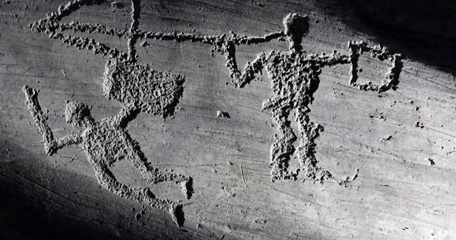 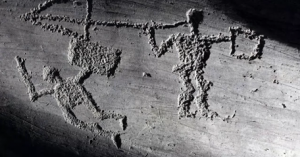 Haunting artwork, chiseled into rock over a period stretching from 7,000 BC to the 16th century, has been digitized for an interactive display in the UK at the Cambridge University museum:

On a screen at the Cambridge University archaeology museum, a 9,000-year-old stag yawns and stretches – only to collapse, pierced by a stone age hunter’s spear. The stag and hunter come from Valcamonica at the foot of the Italian Alps, one of the greatest galleries of prehistoric art, where more than 140,000 images were pecked into the rock with stone tools.

Viewing the 60-mile length of the valley, now a Unesco world heritage site, may demand steep scrambles through chestnut forests and up steep slopes, but an international team including Cambridge academics has digitised and animated the carvings so that the humans and animals run, work and fight again. The results are on display for the first time in the UK at the Cambridge museum.