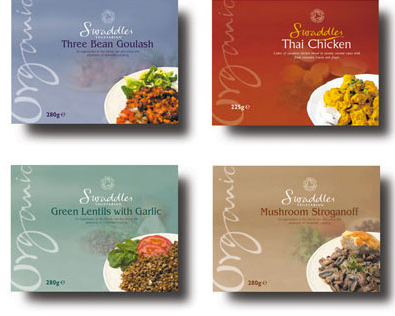 In September 2009, Neil Stansfield of Northamptonshire was jailed for over two years for buying own-brand, non-organic supermarket food, repackaging it as well-sourced organic produce and selling it on at a huge markup to highly reputable food retailers.

On the one hand what he did was a shameful act of manipulation that undermined an already beleaguered organic market and the honest work of a lot of passionate food producers. On the other hand it was a hilarious example of how branding can increase the perceived value of a product.

For five years Stansfield and his staff of twelve were purchasing pork pies, smoked salmon and much more from the likes of Tesco and Aldi, stripping the outers, and re-wrapping them in their Swaddles Organic branded packaging. In doing so Stansfield not only made a name for himself as a highly regarded organic food supplier, but also managed to sell his products to discerning retailers like Fortnum and Mason, a coup of which he boasted to the local paper.

“Fortnum and Mason searched for the finest British classic pie throughout the UK and after arduous searching they came upon ONEfood and Swaddles, sampled the product and found it to be the best in the UK.”
— NEIL STANSFIELD

He called Swaddles’ parent company ONEfood — where the ONE stood for Organic, Natural and Ethical — and recorded annual sales of between £500,000 and £2.5 million.