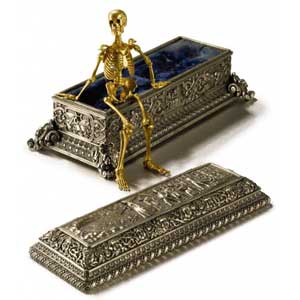 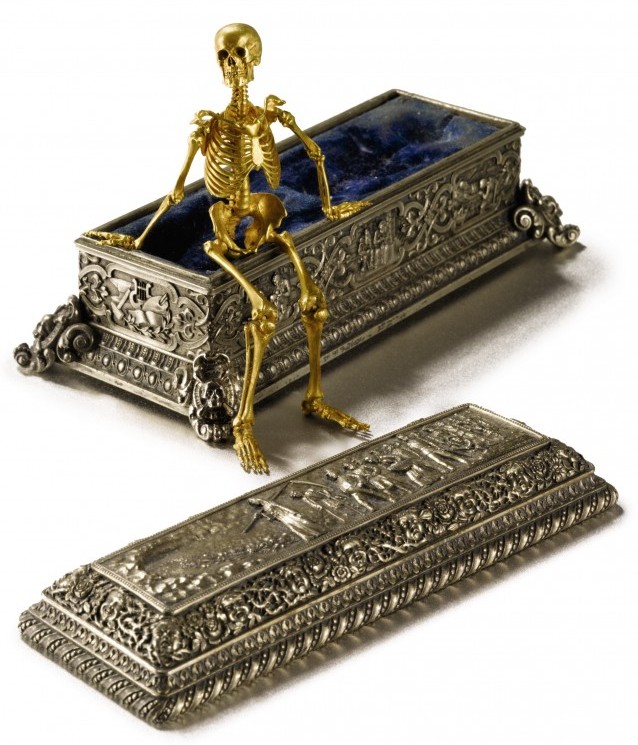 By Alexis Coe from The Awl:

In 1896, Israel Rouchomovsky, in Odessa, completed a 3-1/2 inch gold skeleton with 167 parts. It had taken five long years to create a fully articulated rendering, and he took particular delight in the lower jaw, which opened and shut. In Rouchomovsky’s memoirs, he wrote that he was truly satisfied as he made the final engraving, “Mozyr [18]92 Odessa [18]96” on the right splint-bone, and his name on the left, but “it was at that point that I realized that this ‘deceased’ deserved a beautiful sarcophagus.” He spent another five years on a velvet-lined silver coffin, illustrating the removable cover with the footsteps of the Angel of Death, surrounded by infants alternately laughing and crying. The base was a contemplation on the course of life, with war at one end and the arts at the other.

This Monday, April 29th, in Manhattan, Sotheby’s will auction off the gold skeleton and the silver-gilt sarcophagus. The auction house estimates that the silversmith’s decade-long endeavor, which has resided in hedge fund manager Michael Steinhardt’s Judaica collection, will bring in $150-250,000.