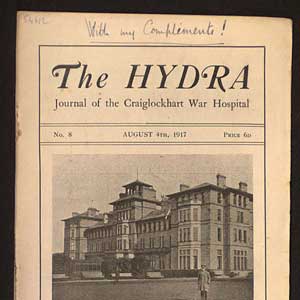 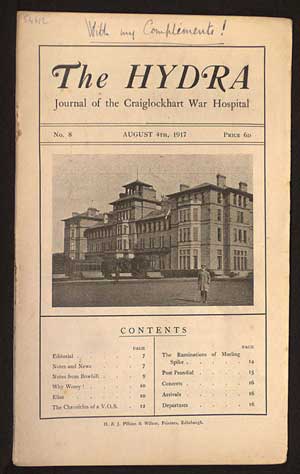 The Hydra was a journal written by patients at Craiglockhart, a World War I hospital in Edinburgh, Scotland. The hospital was for both officers and enlisted men suffering from “shell-shock” — what we’d now call Post-Traumatic Stress Disorder — with a variety of causes and symptoms. Patients included poets Wilfred Owen and Siegfried Sassoon.

The institution was headed by Dr. William Rivers, a psychiatrist who used the then-novel treatment of talk therapy as part of the strategy to relieve the men of their symptoms and make them fit to be sent back to war.

[View pages of this and other issues of the journal]

Pat Barker has written an award-winning trilogy of historical fiction about the hospital and its inmates — exhaustively researched and not sensationalistic.