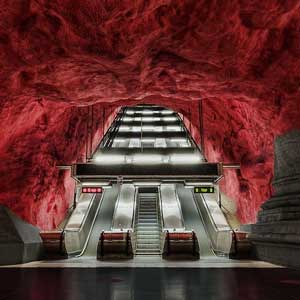 By Vincze Miklós from io9.com:

Rådhuset (Court House) station was opened in 1975 as a part of the Stockholm rapid transit system, one of the best examples of organic architecture.

The history of rapid-transit began 150 years ago, with the opening of the Metropolitan Railway in London in 1863. In the next century and a half, dozens of architects and engineers have worked on underground tunnels and stations. Some are abandoned now, but others are as good as new. Here are some of the most wonderful underground railway stations. (via Tobias Lindman/Flickr)

The only place where all three of Stockholm’s metro lines meet has this really wonderful one platform station, opened in 1975.

(via Paolo Rosa/Flickr and Erzsébet)

This station was opened in 1998, but the 11 large lamps (with red, blue, and yellow lights) were installed three years later.

Marienplatz Station is one of the most frequently used stations in Munich, and was opened as part of the new S-Bahn network for the 1972 Summer Olympics.

[Full article with even more photos]