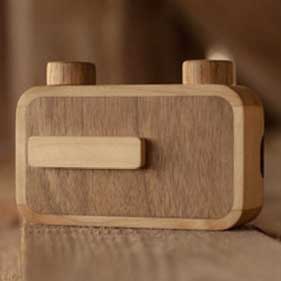 Digital cameras are great, but like most electronics, they likely won’t withstand the test of time in, say, a century from now.

So Slovenian industrial designer and self-taught carpenter Elvis Halilović developed pinhole cameras that he and his brother make out of locally-harvested chestnut and maple wood. The ONDU Pinhole Cameras, as Halilović has branded them, were created in six different dimensions and sizes. The designs can accommodate everything from 35mm to 4-by-5-inch film to even larger paper.

Pinhole cameras don’t use lenses. Instead, they feature a pin-sized hole to produce an image, according to Halilović. To expose images on the film, you just open the shutter by moving it up, and then close it by moving it down.

The cameras feature a unique design with handmade wooden enclosures and no visible screws. Instead, strong magnets hold most of the camera together.

Halilović is raising funds on Kickstarter to bulk order parts and make improvements to his workshop. With 25 days still left to go in the Kickstarter campaign, backers have already surpassed the $10,000 goal by pledging more than $42,200 as of Sunday afternoon. At various pledge levels, backers can get different versions of the ONDU camera.

“One of the main reasons that drove me into carpentry in the first place was that I wanted to make durable, long-lasting — and most of all — functional cameras,” said Halilović in the project’s Kickstarter video. He adds that he’s been making pinhole cameras for the last seven years.

“Pinhole photography slows the experience … that you truly begin to appreciate the phenomena of lights.”

Sample photos taken with these cameras can be seen on the project’s Kickstarter page.

Because these ONDU pinhole cameras are wooden and don’t have any electronics, you could hypothetically pass on these timeless gadgets for generations.

Thumbnail and image courtesy of ONDU via Kickstarter page.