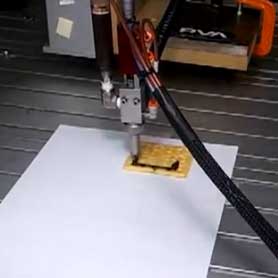 NASA has bestowed a $125,000 grant upon a research corporation to pursue the development of 3D-printable food, according to a report from Quartz. Anjan Contractor, who runs Systems & Materials Research Corporation, hopes to design a system that will turn shelf-stable cartridges of sugars, complex carbs, and protein into edible food on demand.

By the time the population reaches 12 billion people, we will have to change our perceptions of what “food” is in order to sustain everyone.

Contractor asserts that by the time the population reaches 12 billion people (“peak human” for Earth being around 9.5 billion to 10 billion people), we will have to change our perceptions of what “food” is in order to sustain everyone. A modified RepRap 3D printer serves as Contractor’s theoretical prototype design for printing food.

Contractor plans to keep the printer open-source and envisions situations where recipes can be traded and tweaked by users. The printer could even theoretically produce foods based on the optimal nutritional makeup for the consumer, whether it’s a young boy, old woman, or hung-over college student.

Quartz notes, per the NASA grant, that Contractor’s current focus is developing printable food for space travel. If 3D printers can someday handle food chemistry like they handle gun components (and become drastically less expensive), we’d try some nutritionally optimized meatcubes fresh out of the extruder. For science.