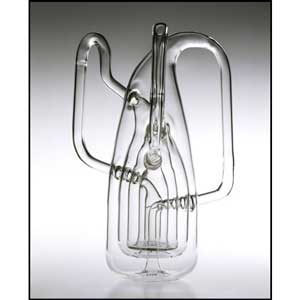 By Cory Doctorow from BoingBoing.net:

A single surface model made by Alan Bennett in Bedford, United Kingdom. It consists of three Klein bottles set inside each other to produce, when cut, three pairs of single-twist Mobius strips. A Klein bottle has no edges, no outside or inside and cannot be properly constructed in three dimensions.

[From user winkybb: Theoretically, with a Klein bottle the “tube” passes through the side of the bottle without there being an intersection in the surface. The tube passes from one side to the other in a fourth dimension. Not possible in three dimensions, so this is a representation only. Not a true Klein bottle.]