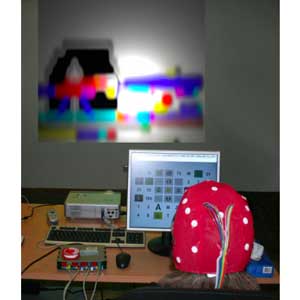 By Nancy Owano from PhysOrg.com: Heide Pfutzner is getting favorable recognition as an artist who has produced skilled, accomplished abstract paintings with their colorful shapes in electric-like blues, reds, pinks, and yellows, Her admirers not only appreciate her art but her determination as a paralyzed woman who paints by way of thoughts. These thoughts are translated into pictures by a computer. She is able to express herself creatively through brainpainting, where a computer system can translate an artist’s thoughts into images. With use of a brain controlled computer system, the person’s brainwaves translate into instructions as to which colors, shapes and brushes will be put to use for the finished piece.

Pfutzner was a former teacher in Germany; she fell ill in 2007 and was diagnosed with Amyotrophic Lateral Sclerosis (ALS), also called Lou Gehrig’s disease in the U.S. The disease left her paralyzed, able only to move her eyes. Her daughter made some contacts, whereby her mother was eventually introduced to the University of Wurzburg’s BCI program. “They developed a special brainpainting program for me,” she said, “and we’ve been a good team ever since.”

BCI stands for brain-computer interface. BCIs translate brain signals into operational commands for technical devices. BCI approaches have been studied for some time; various electroencephalogram (EEG) signals have been applied to control a BCI, including event-related potentials (ERP). Scientists at Wurzburg are are interested in how BCI may serve as an alternative communication channel for patients with impaired speech and motor functions.

ALS patients deprived of speech and movement may find that BCI provides an opportunity, in this otherwise locked state, to communicate, and that is a core focus area for research at the school.

Researchers have shown that users with impaired motor control such as patients with ALS are able to use something called “the P300-BCI” for communication. The P300 is a type of BCI that is based on ERPs, and It is mainly used for communication purposes.

Users are presented with a matrix consisting of letters and numbers flashed consecutively. By focusing on the intended letter or number, flashing will elicit a prominent positive deflection – the P300 – in the user’s EEG. By detecting the P300 from the event-related EEG, the system can identify which letter/number the user is intending to spell. Scientists have also adapted the P300 to a brainpainting application developed to paint pictures using brain activity only. A brainpainting application was designed by artist Adi Hösle in cooperation with the Institute of Medical Psychology and Behavioral Neurobiology at the University of Tübingen, based on a P300-spelling application. The cells of a 6 × 8 matrix contain symbols indicating color, objects, object size, transparency, and cursor movement.

Explore further: Two minds can be better than one: Thought-controlled virtual spacecraft