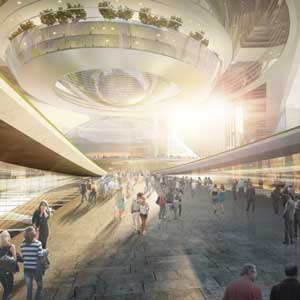 Penn Station is the most heavily trafficked train depot in the United States, a cultural icon, and sorely in need of a makeover. But upgrading this century-old station has been difficult because it’s underneath another thriving landmark, Madison Square Garden (MSG). However, a recent city ruling would end MSG’s lease on the land in 2023, so the Municipal Art Society of New York commissioned four prominent architecture firms to provide a vision for what the station could be without consideration for the Knick’s games and Phish concerts that are usually happening overhead.

Skidmore, Owings & Merrill (SOM), which has ambitious projects with iconic structures like the Freedom Tower and Burj Khalifa to its credit, was one of the firms selected to reimagine the station. True to form, its proposal would transform this piece of civic infrastructure by expanding the scope to include a new park, commercial district, cultural buildings, and residences spread over two city blocks.

“We imagined the site as vertically layered — mixing places to live, to work, and to play, but most importantly, the public space has to take priority over all other uses,” says Roger Duffy, FAIA and partner at SOM. “These spaces cannot be publicly accessible, privately owned. This site would be the gateway to the city for generations to come.”

SOM’s proposal relocates Madison Square Garden to an adjacent plot of land, providing an opportunity to update Penn Station’s aesthetics and flow. A swooping glass dome over the main ticketing area would allow natural light to permeate the subterranean structure. A reconfigured layout would seamlessly connect the rich web of transportation infrastructure New Yorkers rely on — Regional Acela trains, tri-state commuter rails, and daily MTA riders would all get upgraded amenities, intuitive pathways to follow, and a direct connection to the airport. A tiered garden above the station helps the bustling exchange point become a destination in its own right.

SOM’s design isn’t meant to be a mere functional upgrade, but an icon worthy of the city’s global status, whether a visitor is coming from Hong Kong or commuting from Hoboken. “You reach ground and you emerge into a lush new park and you walk to the curb to catch a cab. As you take a left on one of the city’s great avenues, you glance back through the rear window, to see floating in the sky above you an entire city of spaces, all centered around the station,” says Duffy. “That is how entering New York City should feel.”

There will be a number of hurdles for this design to clear before the ceremonial first shovel of dirt is scooped. SOM’s proposal will be competing with similarly impressive designs from other star firms: Diller Scofidio + Renfro, H3 Hardy Collaboration Architecture, and SHoP Architects. Politics will introduce challenges — a plan to overhaul the two structures has been grinding its way through New York bureaucracy since the early 1990s. And there is the little matter of paying for what would be a multi-billion-dollar project that the owners of MSG call “Pie-in-the-sky.”

Undaunted by the challenges and costs, Duffy and his team see the project differently. “For us, this isn’t yet a question of cost,” he says. “It is a question of our intended values and our collective will.”