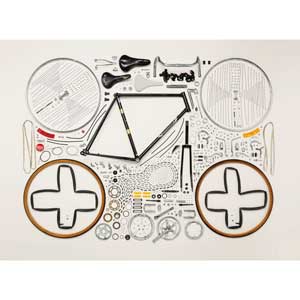 In the new book Things Come Apart, Canadian photographer Todd McLellan painstakingly disassembles 50 everyday objects, including a tiny Swiss Army knife and a single engine aircraft, and carefully photographs the results. Essays by noted DIY repair gurus like Kyle Wiens provide context for the pictures, but the main attraction is getting to see the 21,959 components that make up the most iconic products of the last 100 years.

The photos are enjoyable as pure eye candy, but they also illustrate the history of modern manufacturing. A clock produced in the early part of the century has just a couple dozen mechanical parts, while its mid-century counterpart has hundreds of electromechanical components. By the end of the century, the pendulum had swung back with simpler devices that consolidated functionality in electronics and computer chips. ”In the newer objects you would see a lot of the same technology used,” says McLellan. “There began to be a lot of LCD screens that were repeated due to the nature of newer technology relying on screens instead of buttons. What interested me about all of the objects is the design that happened for all the pieces to occupy such a small package.”

Opening these objects helps reveal how deep the culture of design runs at various companies and at different times in history. “Some of the higher profile objects were definitely beautiful on the inside and out,” says McLellan. “Some didn’t really concern themselves with how it looked on the inside.”

Some of the photos also make common objects seem fantastic — the type bars from a mid-century typewriter look like alien hieroglyphs when laid out flat. The images are deliberately orderly, but the project started out like an episode of Hoarders. McLellan collected interesting, discarded objects on the street or at thrift shops and wanted to document them in some way. A traditional still life seemed too bland, and annotated assembly images, while cool, were too time consuming. Finally, he opted to carefully disassemble each object and photograph what amounts to the bill of materials for each product. This proved challenging, especially as McLellan moved beyond appliances and cell phones — disassembling a high tension piano took five days with multiple people on set. Mac enthusiasts may be horrified that McLellan disassembled a rare, original Macintosh computer, but he got over the guilt of it pretty quickly. “When I could take one object and have it enjoyed by more than one person, that was great,” he says. “There’s a reason the storage business is big.”