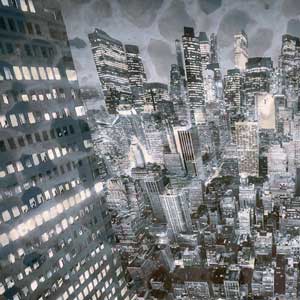 Biomimicry borrows design solutions from the embedded intelligence within animals’ bodies—chiefly from other species. But occasionally, it also borrows from within the human body. For example, a new study from MIT suggests that buildings of the future could be built with super-strong materials based on the structure of human bones.

In a study published yesterday in Advanced Functional Materials, MIT researchers explain how studying human bones led to the creation of three super-materials. Human bones, you see, are made up of microscopic layers of collagen (the stuff your tendons are made from) and hydroxyapatite (which is more like your teeth). Together, they form a stronger structure—a bit like brick and mortar—and make our bones capable of withstanding an incredible amount of force.

The MIT group applied the same principle to three synthetic materials, layering them on a microscopic scale using a 3D printer. The result was a hybrid material with a staggering 22 times the strength of any single material. Wired UK writer Liat Clark explains:

The team first designed the three materials using computer software: bone and nacre (mother of pearl); mineral calcite and a snakeskin-like diamond-patterned material. Each material […] would be made from two synthetic materials to “micrometer resolution”, with one acting as the bricks and the other the cement. The mother of pearl-type material was made from a microscopic structure that looks like a wall, while the calcite saw the materials swapped round so the cement was actually made up of the stiffer material, and the bricks the softer.

The paper describes these hybrids as “metamaterials,” and posits that the future of of architecture lies in figuring out how to spend less energy fabricating more efficient buildings. By altering the hierarchical design of materials on a micro level, architects may, eventually, end up altering the way buildings are constructed at a macro scale. In fact, plenty of designers are experimenting with similar ideas—for example, using parametric modeling software to optimize the shape of columns based on stress loads.

Markus Buehler, the head of MIT’s Department of Civil and Environmental Engineering and a lead author on the study, describes the findings as a way to borrow from nature while pursuing the future. “The geometric patterns we used in the synthetic materials are based on those seen in natural materials like bone or nacre, but also include new designs that do not exist in nature,” he said in a statement. “As engineers we are no longer limited to the natural patterns. We can design our own, which may perform even better than the ones that already exist.”

The biggest challenge, so far, is one of scale: 3D printing is still too expensive and inaccurate to scale production up to the building scale. Still, as Harvard’s Jennifer Lewis put it, “this research is a wonderful example of how 3-D printing can be used to fabricate complex architectures that emulate those found in nature.” [Wired UK]

“This photo shows the brick-and-mortar pattern of simulated bone and nacre against the backdrop of real nacre found in the inner shell of many mollusks,” explain the folks at MIT.