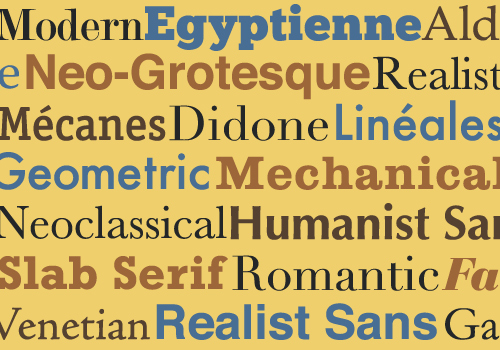 In my previous article on Smashing Magazine (“Understanding the Difference Between Typography and Lettering”), I wrote about how understanding type terminology can help us better appreciate the arts of typography and lettering. This article again deals with terminology, probably more specifically than most designers are used to, and the title gets to the heart of what I’m communicating in this article.

Everyone knows their serifs and sans, slabs and scripts, but most classifications go much deeper than that. Type classification, while helpful, is often convoluted, confusing and even controversial. This article, distilling some of the complexities into a more understandable format, lands somewhere in the middle between the basics and genuine type nerdery — the perfect level for a practicing designer.

There’s a certain intellectual delight in knowledge, particularly knowledge about one’s field of work and study. More importantly, perhaps, there is a way in which seemingly impractical knowledge of one’s profession lends more credence to the designer. That being said, what you’ll read here is by no means impractical. It really comes down to solid design choices.

A good grasp of type history will help you avoid typographic anachronisms, which, although often lost on the general public, do not escape the notice of many designers, as demonstrated in Mark Simonson’s article on the 2012 Oscar winner for Best Picture, “The Artist,” and his other typographic scrutinies of popular movies and media.

It’s not exclusively about the history of type, however. Type classification is also helpful in pairing typefaces for projects, sometimes based on historical proximity but also by noting similar features that unify the typefaces, such as axis or x-height. In some cases, by finding enough disparity in the small features, very different typefaces become complementary.

Most importantly, perhaps, this article will not only familiarize you with general type history and commonly used terminology, but also help you learn to look for and recognize important characteristics of type and the inexhaustible minutiae that make typefaces unique, as well as arm you with useful descriptors of type styles.

Over the past century, quite a few classification systems have been proposed. Most are generally believed to be subjective and incomplete, and many of them use the same terms for similar but slightly different classes. The impossibility of a truly complete classification system has led many people to dismiss any attempt to classify typefaces — there are simply too many variables to make anything close to a practical, comprehensive system. Essentially, classification describes typefaces; it does not define them. It’s not inflexible, and is more of an aid than a rule. However, for the reasons given above, I believe there is value to be found in it. Below are a few examples.

The primary “official” classification system currently is the Vox-ATypI system. Originally put together in 1954 by Maxmilien Vox, it was adopted in 1962 by the Association Typographique Internationale (ATypI), which made a minor change at the 2010 conference (appropriately, held in Dublin) to include Gaelic as an extra category. It classifies typefaces in 11 general categories, with some subdivision. Its Wikipedia article provides an excellent overview.

The British Standards Classification of Typefaces, adopted in 1967, is also based on Vox’s original classification. It is slightly simplified and has remained essentially unchanged since its adoption.

Gerrit Noordzij, while at the Royal Academy of Fine Arts in the Hague, held that typography was essentially an extension of handwriting, teaching typography using loose categories of letters that might be written with a broad-nib or pointed-nib pen, as well as interrupted or uninterrupted strokes, with varieties of both serifs and sans falling into each category.

These are just a few of the ways people have classified type over the years. In this two-part article, I will condense the various methods slightly and present what is at the very least generally accepted as legitimate (as there will always be a few out there who refuse to give up a particularly unusual classification method, or who decry any method at all).