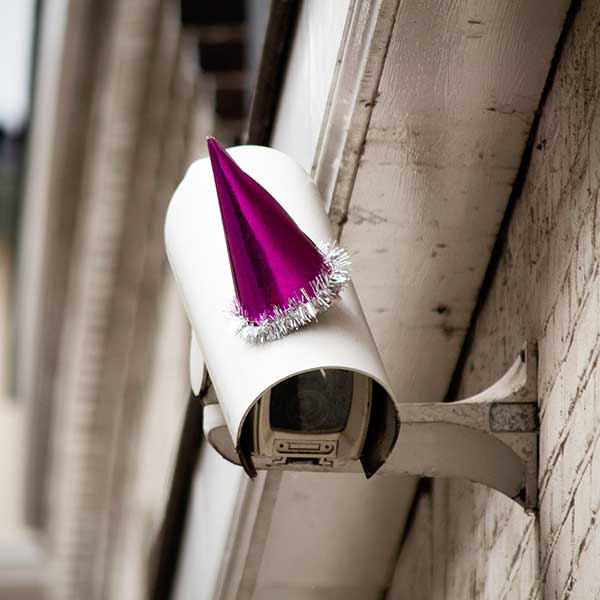 By Anne Sewell from DigitalJournal.com:

Utrecht – The famous author of “Nineteen Eighty-Four”, George Orwell, would have turned 110 on June 25, 2013 if he was still with us. Two Dutch artists found the perfect way to celebrate his birthday in the current surveillance climate.

With the current revelations by Edward Snowden about the NSA’s spying on citizens of the world, these artists could not have found a better way to celebrate Orwell’s birthday. Orwell was born on June 25, 1903, and the two Dutch artists, who call themselves FRONT404, created an impromptu art exhibit in Utrecht, Netherlands. They celebrated Orwell’s birthday with party hats placed on closed-circuit television (CCTV) cameras throughout the city. For those that haven’t heard of Orwell’s novel, “Nineteen Eighty-Four“, the novel tells the story of a citizen of a totalitarian society called Oceania, where Winston Smith lives in a state of constant surveillance, allowing the government to eliminate subversives. The Oceania government also to craft whatever societal narratives it desires to serve as the truth, and Smith’s job is to re-write past newspaper articles so that the historical record always supports the current party line. Many people believe that these days that the Mainstream Media is doing just that. FRONT404’s two artists, Thomas voor ‘t Hekke and Bas van Oerle, wrote on the project’s website:

By putting these happy party hats on the surveillance cameras, we don’t just celebrate Orwell’s birthday. By making these inconspicuous cameras that we ignore in our daily lives catch the eye again, we also create awareness of how many cameras really watch us nowadays, and that the surveillance state described by Orwell is getting closer and closer to reality.

The city of Utrecht, like many other European cities, uses a series of surveillance cameras on lampposts and walls to monitor its resident’s activities. While this is usually unobstrusive and useful for reducing or solving crimes, it does also raise some legitimate concerns about privacy and also the morality of monitoring innocent people. In light of the US National Security Agency’s recent activities, this artistic prank is appropriate indeed. In a similar fashion to the government of the fictional Oceania, and without prior objection from the Congressional Intelligence Committees or the White House, the NSA had been spying on private citizens’ online activities and documenting their actions in an effort to root out potential threats to national security. On top of this, the NSA whistleblower himself, Edward Snowden, has been accused under the Espionage Act of being a potential traitor to the country.