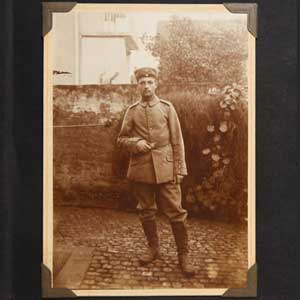 As I was getting ready to leave home after Thanksgiving, almost two years ago, my mom said she had something to show me. She pulled out a big black photo album from under our coffee table, casually laid it out in front of me, and blindsided me with the most meaningful, wonderful project I have ever undertaken.This is my great-grandfather Walter Koessler’s photo album from when he was an officer throughout all four years of World War One. It’s incredible for many reasons:

As soon as I saw this, I knew I needed to research it carefully and share it with the world. For the most part, there are no captions for the photos, so that research has been a big challenge. I’ve gone through the album many times, interviewed family members, reached out to people online, and visited one of the places in the album.

My family has also saved a box of about a hundred more stereographs that show WWI in 3D. I’ve since found that my grandma saved hundreds of the original negatives from both the album and the stereographs, and they’re practically pristine. It’s a formidable, and frankly somewhat intimidating collection. Nearly a hundred years later, it seems almost impossible that these things have been kept in such great condition, and I’m so grateful my family has let me take charge of it.

Finally, I think I’m prepared to start the process of scanning and sharing them here. I hope you’ll find it as fascinating as I do.

First scanned photos: scroll to the bottom of each page and click “<<< prev” for subsequent images.