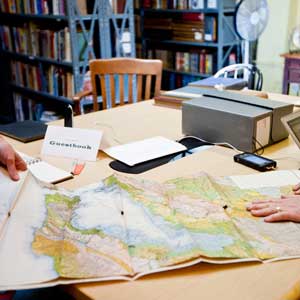 By Greg Miller from wired.com: Have you ever gone to a place you’ve always wanted to visit and found out it was even more awesome than you thought it would be? That’s how I felt last week when we visited the Prelinger Library, an eclectic collection run by Megan and Rick Prelinger (the folks in the photo below). I spent the rest of the day kicking myself for not getting there earlier, and a fair bit of the next day planning my return.

The library shares a building with a carpet store and a dance studio in a slightly ragged patch of San Francisco’s SoMa neighborhood. There’s no sign, but if you know what you’re looking for, you step inside the lobby and press a button on the intercom to be admitted. It’s like a speakeasy of maps.

OK, so there’s lots more than just maps, but maps are what we were there to see. On the library’s website, the Prelingers describe it as “a collection of 19th and 20th century historical ephemera, periodicals, maps, and books, most published in the United States.” They specialize in collecting stuff not commonly found in other libraries.

Inside, the space is small, mostly taken up by shelves. There’s a desk at the front for visitors to read and work. The smell makes me nostalgic for the tiny public library my mom used to take me to when I was a kid.

The library opened in 2004 and now houses something like 75,000 items. “The rule is, it takes one of us to acquire something and two of us to get rid of it,” Rick said.

“Everything that’s here is here because we’re interested in it,” Megan added. “We started the collection because we’re both independent makers drawing on neglected historical material.”

One project is a series of atlases for the map room at the recently re-opened Exploratorium. The atlases are printed on large Tyvek sheets to withstand the onslaught of curious children.

The maps in this gallery are just a tiny sample of the Prelingers’ collection, and they’re certainly not the last ones you’ll see featured here at Map Lab. One thing that strikes me about this group of maps is how they evoke the times and places they came from, from the optimistic spirit of the 1939 New York World’s Fair and Golden Gate International Exposition to the fear and paranoia of the Cold War.

Prepare to be transported.

<< Previous | Click here for larger images and information about the thumbnails below the large map image above.