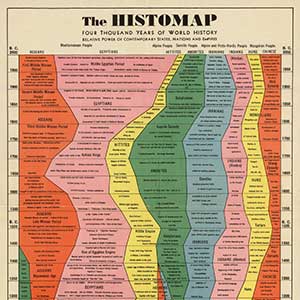 This “Histomap,” created by John B. Sparks, was first printed by Rand McNally in 1931. (The David Rumsey Map Collection hosts a fully zoomable version here.) (Update: Click on the image below to arrive at a bigger version.)

This giant, ambitious chart fit neatly with a trend in nonfiction book publishing of the 1920s and 1930s: the “outline,” in which large subjects (the history of the world! every school of philosophy! all of modern physics!) were distilled into a form comprehensible to the most uneducated layman.

The 5-foot-long Histomap was sold for $1 and folded into a green cover, which featured endorsements from historians and reviewers. The chart was advertised as “clear, vivid, and shorn of elaboration,” while at the same time capable of “holding you enthralled” by presenting:

the actual picture of the march of civilization, from the mud huts of the ancients thru the monarchistic glamour of the middle ages to the living panorama of life in present day America.

The chart emphasizes domination, using color to show how the power of various “peoples” (a quasi-racial understanding of the nature of human groups, quite popular at the time) evolved throughout history.

It’s unclear what the width of the colored streams is meant to indicate. In other words, if the Y axis of the chart clearly represents time, what does the X axis represent? Did Sparks see history as a zero-sum game, in which peoples and nations would vie for shares of finite resources? Given the timing of his enterprise—he made this chart between two world wars and at the beginning of a major depression—this might well have been his thinking.

Sparks followed up on the success of this Histomap by publishing at least two more: the Histomap of religion (which I’ve been unable to find online) and the Histomap of evolution.