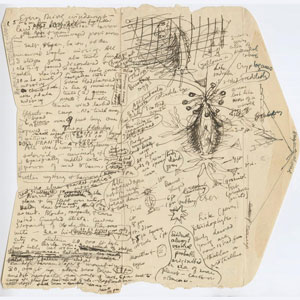 HP Lovecraft, notes on “At the Mountains of Madness,” 1931. The John Hay Library, Brown University.

This is one of seven pages of plot notes that horror author H.P. Lovecraft produced while planning his 1936 novella “At the Mountains of Madness.” The writer, who had fallen on hard times, used a deconstructed envelope in an attempt to save paper.

The novella, written in 1931 and published in 1936 in the pulp magazine Astounding Stories, is one of Lovecraft’s best works. Narrated by a traumatized geologist, William Dyer, the tale is framed as a warning, and reads like a cross between an expedition report and an exorcism. Dyer tells of an Antarctic trip that he took with a group of fellow scientists (most of whom perished on the trip), and reports on the horrors that he found hidden in the ice. He pleads with the world not to send any more explorers south, fearing what they might unleash.

In Lovecraft’s mythology, ancient beings of profound malevolence lurk just below the surface of the everyday world. “Mountains” featured several species of forgotten, intelligent beings, including the “Elder Things.” These star-headed, sapient creatures, not quite plant and not quite animal, were first introduced in this novella.

The sketch on the right side of this page of notes, with its annotations (“body dark grey”; “all appendages not in use customarily folded down to body”; “leathery or rubbery”) represents Lovecraft working out the specifics of an Elder Thing’s anatomy. As Lovecraft’s narrator was a scientist, the description of the Things in the novella is dense and layered; here we can see the beginnings of that detail.

The exhibit “The Shadow over College Street: H.P. Lovecraft in Providence,” which includes this page along with other Lovecraftiana, will be on view at the Providence Athenaeum through September 22, with a satellite exhibit at Brown’s John D. Rockefeller, Jr. Library through October 24. Thanks to Brown University Library curator Holly Snyder for her help, and to Steven Lubar, whose Twitter feed tipped me off to this find. 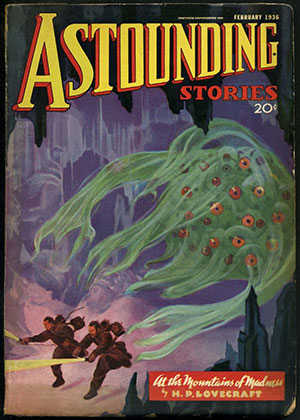