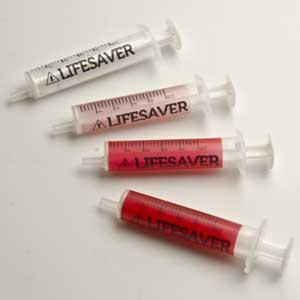 First, the bad news: As much as 40 percent of the world’s 40 billion injections administered every year are with unsterile, reused syringes, according to the World Health Organization.

Fortunately, people are working on better, tamper-proof syringes, and one of those — the ABC Syringe — holds such promise that it is a finalist at this year’s Index Awards in Denmark.

The syringe, designed by Dr. David Swann of Huddersfield University in England, comes in a nitrogen-filled pack, which ensures that the syringe is clear. But when exposed to air, the special ink in the syringe’s barrel absorbs the carbon dioxide and, after 60 seconds of exposure, turns the barrel of the syringe a bright red to warn that it is now “used.”

Unsafe injections causes 5 percent of all new HIV cases, 32 percent of all Hepatitis B cases, and 40 percent of Hepatitis C cases, according to WHO. And this isn’t purely the result of IV drug users sharing needles; so-called syringe scavengers in places like India scrape out a living selling used syringes to hospitals that are desperate to cut costs when giving vaccinations, blood transfusions, and other medical services that require syringes.

“When you compare a sterile syringe just out of its packaging with a syringe that’s been washed, how do you determine the difference?” Swann recently said in a CNN interview. “We conceived an intelligent ink that, if exposed to air by taking it out of the package or if the package is breached, would activate it and turn it red.”

While Swann acknowledges that the concept would require a public information campaign — “don’t use the red syringe” ought to do it — the ABC has a serious advantage over previous “safety syringe” iterations in that it adds only 1 percent to the retail cost instead of 200 percent.

Swann’s work is already paying off in India, where he recently tested the syringe. (Of the four to five billion injections administered every year in India, at least 2.5 billion are considered unsafe.) Not only did 100 percent of those involved accurately identify red syringes as dangerous, but that cohort included both literate and illiterate men, women, and children.

Swann estimates that within five years of widespread use his syringe should help prevent 700,000 unsafe injections and save $130 million in medical costs, not to mention reduce the 1.3 million deaths that result every year from unsafe injection practices.