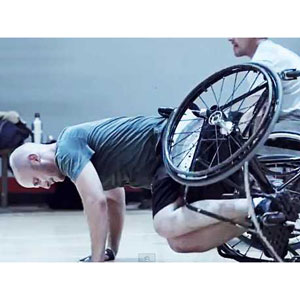 By Aaron Taube from businessinsider.com.au: For the most part, they depict men as unfeeling doofuses who only want to hook up with hot women and watch sports without being bothered by their wives.

But a poignant new ad from Guinness flips the switch by presenting a group of athletic, beer-drinking men who are defined as much by their kindness as their physical strength.

In it, a group of muscular men partake in an intense game of wheelchair basketball as stirring music plays in the background. We wouldn’t want to spoil the ad’s awesome surprise ending, so take a look at the video now before reading further:

After about 40 seconds of physical play, five of the six men stand up from their chairs, revealing they were only playing to allow their wheelchair-bound friend a chance to participate.

Afterward, they celebrate with a round of Guinness as a voiceover reminds viewers that “The choices we make reveal the true nature of our character.”

What’s exceptional about the ad is how it presents the characters’ sensitivity hand-in-hand with their physical strength and love for contact sports, implying that a Guinness drinker can love his friends as much as he loves his favourite beer and his favourite sport.

By doing so, Guinness distinguishes itself from its competitors by aligning its product with a brand of masculinity that has long been absent from beer advertising.

The ad has been viewed 117,000 times on YouTube since being posted Tuesday. Guinness’ manufacturer, Diageo, confirmed that the ad was made by BBDO’s New York office.