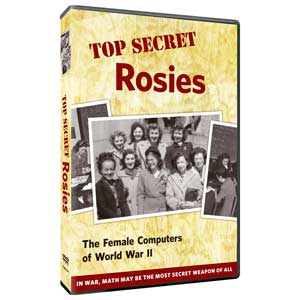 From aauw.org (The American Association of University Women):

LeAnn Erickson (far right) visits the World War II memorial with some of the women featured in her documentary.

When it comes to history, it is unfortunately often only the dominant voice that writes the narrative and dictates what is worth memorializing. That’s why it’s especially exciting when something new is uncovered, a different voice given the chance to tell their version of the story. More than 70 years ago, “when computers were human and women were underestimated, a group of female mathematicians helped win a war and usher in the modern computer age.” Now, their history has finally been told. This is the story of Top-Secret Rosies. 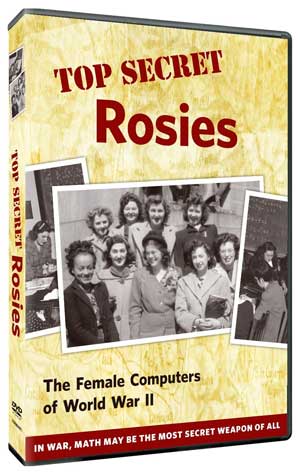 LeAnn Erickson (a 2010–11 AAUW Community Action Grantee) admits, “I discovered this story purely by accident.” While working on a film project about blockbusting in Philadelphia during the 1950s and 60s, Erickson was at the house of twins Doris Blumberg Polsky and Shirley Blumberg Melvin, scanning photos for the documentary, when she overheard the ladies talking.

“Now, was this taken after we moved to Mt Airy?” Polsky asked.

“No, that was taken when we were at UPenn for the Army.”

Curiosity piqued, Erickson asked them what they were talking about. Melvin said, “Oh, during the war we worked as mathematicians for the Army. We were recruited right out of high school.” Promising to come back to get their story when she was done with her current project, Erickson says the sisters “laughed as if they didn’t believe me.” But come back she did, and seven years later, in 2010, she had produced the film Top-Secret Rosies: The Female Computers of WWII.

When the United States entered World War II, the Army initiated a national call for women mathematicians. In fact, AAUW was one of the organizations contacted for help with recruiting! Erickson tells us that AAUW “helped spread the word about this great opportunity open to college women. I was proud to be able to use the letter specifically addressed to AAUW in the documentary.” These “computers” — then the term for someone who computes, rather than our current notion of the machine — would be responsible for calculating ballistics tables for missiles being used by allied forces overseas. The stakes were high, and these women worked hard on their mission at the University of Pennsylvania from 1942 to 1946.

Erickson details the individual stories of four women in particular. Her documentary illuminates a part of history that, until now, lived only in the memories of the women involved. When asked which stories stood out during her research and interviews, Erickson revealed that there was yet another lens through which to look at this story — that of race. “I knew that the World War II era was a very different one for women and people of color, but I was still surprised at various stories the women shared,” she said. One story came from Marlyn Wescoff Meltzer, who worked with Alyce Hall, the only African American in their unit. “Marlyn was organizing a going-away dinner, but Alyce pulled her aside to say she wouldn’t be able to come since the restaurant they had chosen wouldn’t serve her. Shocked at this news, Marlyn said she would find one that would.” The photo on the cover of the film includes Alyce Hall (bottom row on the left) and was taken the night of that dinner.

“Top-Secret Rosies has had extensive reach in educational circles — it is being used in junior high, high school, and college classrooms, and is held in over 500 libraries across the world,” says Erickson. Her goal is to have an impact on girls in fourth through sixth grades. In order to target them, she has adapted the story for use in an iBook app with a catchy title: “The Computer Wore Heels.” Along with the app for digital books, Erickson has also created a study guide that educators can use while showing the documentary in their class.

The content and style of Erickson’s documentary have met with great success. She recalls, “The Community Action Grant made it possible for me to travel across the nation, presenting the film and leading discussions with community members, STEM professionals, teachers, and students. … The travel I’ve done with the film exposed me to people and opportunities I would not have had otherwise.” She was particularly happy to be a panelist at the 2011 U.N. Commission on the Status of Women Conference.

While filmmaking can be difficult to fundraise for, Erickson encourages anyone with a good idea and the will to go with it to “think outside the usual film-funding box,” and to be unafraid of approaching organizations who share your prospective audience. As she notes, “I did this with AAUW and have reaped the benefits of our collaboration.”

Reflecting on the documentary, Erickson says, “Heroic behavior happens all around us all the time. Regular people can — and do — do amazing things every day, things that may not seem important at the time but have a ripple effect.” She tells her film students at Temple University to pay attention to their surroundings and to opportunities that cross their paths, however unremarkable they may seem. After all, Erickson says, if we have learned anything from the Top-Secret Rosies, it’s that “there are stories everywhere, waiting to be told.”

This post was written by AAUW Fellowships and Grants Intern Lauren Byrnes.