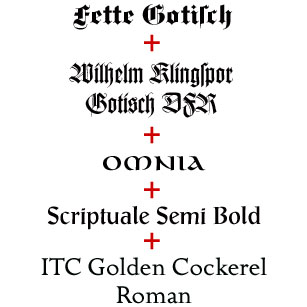 A number of type foundries have font selections suggested for funerals and other solemn occasions. Once you think of it, it seems obvious, but I found it a little startling. Cashing in on grief?

Linotype’s Funeral Value Pack includes five solemn fonts appropriate for the setting of death and funeral announcements. Each of the typefaces offers its own unique appearance.

Three of this Value Pack’s five fonts (Fette Gotisch™, Wilhelm Klingspor Gotisch™, and Omnia™) are best used to set single words, such as the name on an invitation or newspaper death notice. These are very traditional designs, and are best combined with reserved serif or sans serif faces that can be set in much smaller sizes.

Fette Gotisch is a decorative Victorian-style Blackletter face. Its capital letters have a high level of stroke contrast, with both very thick and very thin elements. Fette Gotisch is best used for type in larger sizes, such as headlines or formal certificates.

Wilhelm Klingspor Gotisch of the famous calligrapher and type designer Rudolf Koch is a more expressive Blackletter, full of curves and special twists. Like Fette Gotisch, it is better used as a decorative, larger element within a design.

Omnia offers an uncial-style choice. Its letterforms are more open than those found in Blackletter types; as opposed to Fette Gotisch and Wilhelm Klingspor Gotisch, Omnia looks Irish or Celtic, rather than Germanic.

Another Central European calligraphic vein is represented in Scriptuale™ Semi Bold. Scriptuale Semi Bold’s forms are open and legible. It is a favorite for the cast metal letters that are affixed to memorial stones in Germany. However, body text may also be set in Scriptuale Semi Bold, provided that the text does not run for more than a few lines.

ITC Golden Cockerel™ is a classic English text face based on the work of Eric Gill, one of the seminal typographers of the 20th Century. This typeface may be used in any size, but it functions best in smaller point sizes.