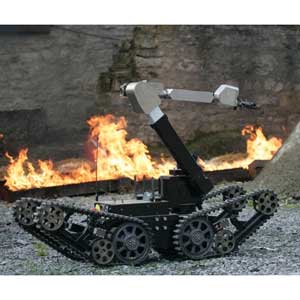 Over the last week Berchtesgaden, Germany has played host to some of the smartest emergency response robots in the world. There, nestled in the shadow of one of Germany’s highest peaks, the euRathlon was held. Multiple real-world emergency scenarios were enacted, giving the 14 teams present a chance to show the world their robot’s mettle.

Three emergency scenarios were enacted: Mobile handling of hazardous materials, underground rescue from a smoke-filled environment and urban recon and surveillance. Of the 14 teams competing, two walked away with the top honors. Team Telerob (pictured above) from aerospace company Cobham took two gold medals, as well as the silver for surveillance. The surveillance gold went to European Logistic Partners (ELP), who also took silver in the other two categories.

Though the two companies swept the scenario awards, both were humble in accepting their prizes. Instead of keeping their prize money, ELP and Cobham donated it to the top-ranked university team amongst the finalists. All 14 teams were invited to next year’s euRathlon competition, which will be held in Italy and focus on underwater emergency response.

By 2015, the competition will become all-encompassing, asking teams to find intelligent solutions to emergencies on land, sea and air. To see the final day of this year’s competition, check out the video below.