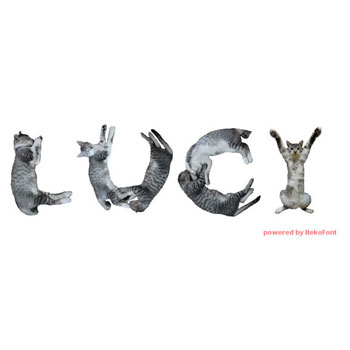 Eleven years ago tomorrow, on September 28, I lost my beautiful sweet Lucy Cat. She was skittish and terrified when I first got her, hiding under the bed and only emerging at night to eat. I decided to take on gentling her as a project, but that soon turned into just loving her up. She eventually graduated to merely prickly, but with an increasing supply of love returned to me. I had her for 11 years and by about half that time, she had softened enough that she would play with other people, and even let them pet her. I was devastated when she died. I know, I know, everyone feels this way about their “best kitty ever,” but Lucy was mine.

In Lucy’s honor, therefore, I have the distinct pleasure of presenting Neko Font, a DIY word creation site that takes any letters(s) you type in and converts them to kitty-shaped furriness! It was created in Japan (“neko” is the Japanese word for cat) but I have the English-language site selected; other languages are available via the menu at the top.

Enjoy! And raise a glass for Lucy.