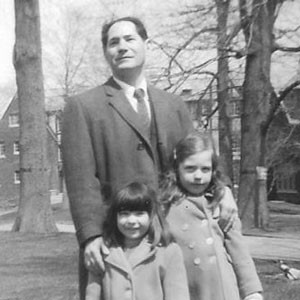 Daddy died at 59, when I was nine, so I didn’t know him as an adult or even a teen. I remember him as always laughing and warm. Maybe that would have changed if I’d been older. According to various other family members, he was much better with babies and small children than older ones. He was involved in politics, like a lot of other atheist Jews. According to my mother Betty Ginzler Ruelius, he was a card-carrying Communist in the 1930s, although according to my sister Terri, he went to a couple of CP meetings and decided that it was not for him. So possibly he’d approve of my activism. Not sure how he’d deal with my being so very queer though. Hmmm.

Also according to Terri, he had a strong interest in philosophy and religions, Subud and particularly Scientology. Other siblings Ron and Denise confirm this too.

Right. He worked as a chemical engineer for a huge engineering services company called Stone & Webster (he always called it “Sweat & Worry”) in Boston, MA. During WWII he was exempt from fighting because he was doing important U.S. work helping design oil refineries in the Middle East. Or, after the war, destabilizing oil-producing nations, I’m not sure. E.g. in 1953 the CIA and British intelligence orchestrated a coup in Iran to overthrow democratically-elected Prime Minister Muhammad Mossadegh, to maintain partial control of the oil industry. So who knows, he may have helped (un)wittingly.

Here are all the pictures I have of him.