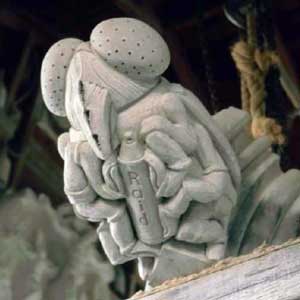 By Laetitia Barbier from AtlasObscura.com:

Fascinating ghouls of another era, gargoyles emerged around the 13th century in European architecture with a vast array of form and function. At first, they were designed as an indispensable engineering trick. Projected from roofs at parapet level, the strange leaning creatures created a siphon for rainwater to protect the walls of the edifice.  They evolved to become “grotesques,” ornamental elements with a specific symbolic charge. With their demonic grins and anthropomorphic shapes, gargoyles and grotesques were used to visually exemplify the concept of evil and virtue at a time when a large part of the population was illiterate. Beyond their moral function, gargoyles also had an “apotropaic” value: their grimacing faces were believed to avert the evil eye and keep it from the sacred space.

Gothic architecture was later revived in the 18th and 19th century in England and the United States. Naturally, gargoyles became one of the stylish signatures of this new Neo Gothic architectural type. But centuries of capricious weather and a lack of care had disfigured the legions of statues that were still silently guarding the old gothic monuments. A large amount of stunning chimeras were actually falling to the ground like a plague rainfall. In order to remedy to this situation, conservation programs were started for some of them, and 20th and 21st century stone carvers were asked to replace as many destroyed gargoyles as possible. If some of them copied meticulously the medieval form of the past, others had another vision of what gargoyles could be.

Darth Vader gargoyle on the Washigton National Cathedral (via Wikimedia)

Many of these examples are unfortunately high on the façades out of sight, but a pair of binoculars might help you out. In the 1980s, Washington National Cathedral became one of the first to experiment with of gargoyle reinterpretation. Some of you might have heard  the story of the most famous one: the Darth Vader gargoyle, who was the winning proposal in a children’s contest organized by National Geographic. Christopher Rader, a 13-year-old kid from Nebraska,  created its design, envisioning the Star Wars villain as a modern incarnation of supreme evil. Sculpted by Jay Hall Carpenter and carved by Patrick J. Plunkett, our dark-sided Anakin is today on the Washington Cathedral, wearing his iconic helmet on the first tiny peaked roof from the center pinnacle, on the right hand side.

Darth Vader on the Washington National Cathedral (via Chimpomatic)