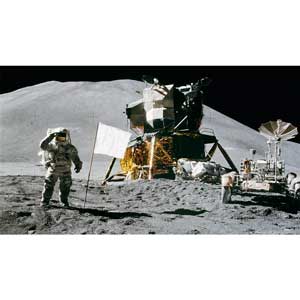 NASA has finally answered a long-standing question: all but one of the six American flags on the Moon are still standing up. Everyone is now proudly talking about it. The only problem is that they aren’t American flags anymore.

They are all white.

The debate on the Moon flags has been going on for decades. Engineers and historians have been discussing it without ever coming to a definitive answer as to their status. Even Dennis Lacarruba—the manufacturer of the flags—didn’t think they would still be standing erect. Lacarruba’s New Jersey company, Annin, made the nylon flags for $5.50 ($33 in 2012 dollars) a piece in 1969:

I can’t believe there would be anything left. I gotta be honest with you. It’s gonna be ashes.

Even the Lunar Reconnaissance Orbiter camera man, Dr. Mark Robinson, was skeptical. Like Lacarruba, Robinson thought that there wouldn’t be any trace of the flags to be found.

But his own camera has proved him wrong. The LRO has been taking photos of the Moon landing sites for a while now. They are so sharp that you can even see the tracks of the rovers.

These photos show that the shadows of the flags are still there. There’s even a video showing how the shadows change as the Moon rotates. Indeed, all of them are standing up except the one left by Armstrong and Aldrin, the first two men on the Moon. The Apollo 11 lunar module crew placed the flag too close to their spacecraft and, according to Buzz Aldrin himself, it was blown away as they blasted off to rendezvous with Michael Collins, on board Columbia, their Command and Service Module orbiting the Moon.

We come in peace

So America, F*ck Yeah, right? Not quite. While the $5.50 nylon flags are still waving on the windless orb, they are not flags of the United States of America anymore. All Moon and material experts have no doubt about it: the flags are now completely white. If you leave a flag on Earth for 43 years, it would be almost completely faded. On the Moon, with no atmospheric protection whatsoever, that process happens a lot faster. The stars and stripes disappeared from our Moon flags quite some time ago.

According to lunar scientist Paul Spudis:

For forty-odd years, the flags have been exposed to the full fury of the Moon’s environment – alternating 14 days of searing sunlight and 100° C heat with 14 days of numbing-cold -150° C darkness. But even more damaging is the intense ultraviolet (UV) radiation from the pure unfiltered sunlight on the cloth (modal) from which the Apollo flags were made. Even on Earth, the colors of a cloth flag flown in bright sunlight for many years will eventually fade and need to be replaced. So it is likely that these symbols of American achievement have been rendered blank, bleached white by the UV radiation of unfiltered sunlight on the lunar surface. Some of them may even have begun to physically disintegrate under the intense flux.

Robinson and Lacarruba agree with Spudis.

So, at the end, it turns out that the commemorative plaque left by Armstrong, Aldrin and Collins on the Eagle’s descent stage, left on the surface of the Moon, was right:

Here men from the planet Earth first set foot upon the Moon.
July 1969, A.D.
We came in peace for all mankind.

We came in peace indeed. And here’s the flag to prove it.

Now, take us to your leader.