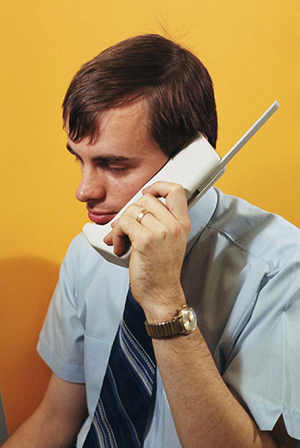 From the Guardian UK:

As we reach the 40th anniversary of the first public mobile phone call, we look back at four decades of innovation, from the “brick” handsets of the 1970s and 1980s to today’s smartphones. Expert Mike Short says: “Since its first use 40 years ago, the mobile phone has completely changed our lives. The first decade was a research or a ‘demonstrator’ phase, rapidly followed by analogue networks deployed over 10 years from the early 1980s largely based on carphones and used in business in the developed world. This soon led to the digital decade mainly between 1993 and 2003 when consumerisation and globalisation of mobile really took off. This led to a further data adoption phase with the arrival of 3G and during 2003 to 2013 access to the internet and the wider use of smartphones became a reality.”