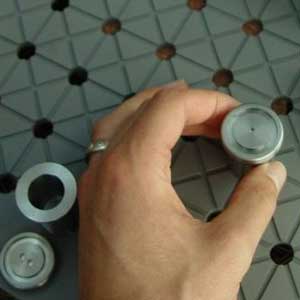 By Spooky from OddityCentral.com:

American Jason Roher has recently won a game design competition after creating a board game that no one is likely to play anytime in the near future, if ever. Called A Game for Someone, Roher’s game was made from titanium, to stand the test of time, and buried somewhere in the Nevada Desert, where it will probably be discovered by an advanced civilization, or zombies, thousands of years from now.

“I wanted to make a game that is not for right now, that I will never play,” Rohrer said, “and nobody now living would ever play.” Inspired by ancient board games like Mancala, as well as “the architects and builders who, over hundreds of years, constructed religious cathedrals that they themselves would never set foot in, never see completed in their lifetimes”, the designer set out to create a game that actually worked, without ever playing it himself. To do that, he first conceived it in computer form, by designing a set of rules that would be playtested not by a human, but by the computer. He told reporters he ended up plugging the game’s rules into a “black box”, and letting the artificial intelligence find imbalances, iterating new rules and repeating. Once the game was playable, he started manufacturing it. He couldn’t shape it from degradable materials like wood, glass or cardboard, so he ultimately decided on making the 18-inch by 18-inch game board and its pieces out of 30 pounds of titanium.

To make sure whoever found it understood how his futuristic game worked, Jason laid out the rules on three pieces of archival, acid-free paper, sealed them in a Pyrex glass tube which then went into a titanium cylinder and set out for the Nevada Desert to bury the thing. Not even Jason knows exactly where it is, as he chose a public plot of land far enough from roads and populated areas, dug a hole, placed the game in it, covered it up and walked away without looking back. He does have the exact GPS coordinated to the location of A Game for Someone, but he made sure it was almost impossible for him or anyone to find it in his or their lifetime.

Prior to his presentation at the Game Developers Conference, back in March, he placed envelopes with the message “”Please do not open yet” on the seats in the room. He showed everyone the video game version of his board game but blurred sections of the board so no would be able to reverse engineer its mechanics. He also didn’t talk about the rules, so no one knows exactly how it plays unless they find his titanium cache.  At the end of his presentation, he asked everyone to open their envelopes. Inside each one was a piece of paper with 900 different sets of GPS coordinates. In total, Rohrer gave the audience more than 1 million coordinates. According to his calculations, if one person visits a GPS location each day with a metal detector, the game will be unearthed sometime within the next million days — a little over 2,700 years.

Although he intended people to search for his game individually, the sheets of paper were collected by volunteer “treasure hunters” at the door upon exit, in an attempt to collate the data and hopefully find it earlier than intended. Still, it’s going to take a while, if it ever gets discovered. So if you’ve ever wondered what humanity’s last board game will be, you’re lucky to know thousands of years in advance.