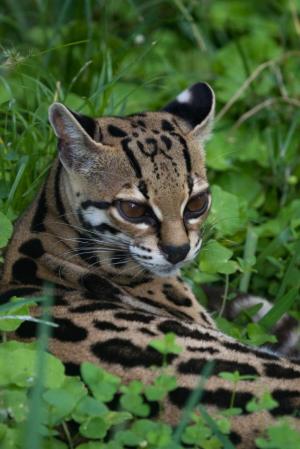 In a fascinating example of vocal mimicry, researchers from the Wildlife Conservation Society (WCS) and UFAM (Federal University of Amazonas) have documented a wild cat species imitating the call of its intended victim: a small, squirrel-sized monkey known as a pied tamarin. This is the first recorded instance of a wild cat species in the Americas mimicking the calls of its prey.

The extraordinary behavior was recorded by researchers from the Wildlife Conservation Society and UFAM in the Amazonian forests of the Reserva Florestal Adolpho Ducke in Brazil. The observations confirmed what until now had been only anecdotal reports from Amazonian inhabitants of wild cat species — including jaguars and pumas — actually mimicking primates, agoutis, and other species in order to draw them within striking range.

Researchers first recorded the incident in 2005 when a group of eight pied tamarins were feeding in a ficus tree. They then observed a margay emitting calls similar to those made by tamarin babies. This attracted the attention of a tamarin “sentinel,” which climbed down from the tree to investigate the sounds coming from a tangle of vines called lianas. While the sentinel monkey started vocalizing to warn the rest of the group of the strange calls, the monkeys were clearly confounded by these familiar vocalizations, choosing to investigate rather than flee. Four other tamarins climbed down to assess the nature of the calls. At that moment, a margay emerged from the foliage walking down the trunk of a tree in a squirrel-like fashion, jumping down and then moving towards the monkeys. Realizing the ruse, the sentinel screamed an alarm and sent the other tamarins fleeing.

While this specific instance of mimicry was unsuccessful, researchers were amazed at the ingenuity of the hunting strategy.

“This observation further proves the reliability of information obtained from Amazonian inhabitants,” said Dr. Avecita Chicchón, director of the Wildlife Conservation Society’s Latin America Program. “This means that accounts of jaguars and pumas using the same vocal mimicry to attract prey–but not yet recorded by scientists–also deserve investigation.”

WCS is currently monitoring populations of the pied tamarin — listed as “Endangered” on the IUCN’s Red List — and is seeking financial support to continue the study, which aims to protect this and other species from extinction. Next to Madagascar, the Amazon has the highest diversity of primates on Earth.

These behavioral insights also are indications of intact Amazon rainforest habitat. WCS works throughout the Amazon to evaluate the conservation importance of these rainforests, which have become increasingly threatened by development.

The above story is reprinted from materials provided by Wildlife Conservation Society, via EurekAlert!, a service of AAAS.

Note: Materials may be edited for content and length. For further information, please contact the source cited above.

Note: If no author is given, the source is cited instead.