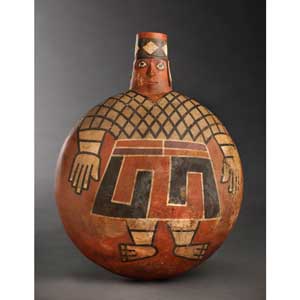 By George Dvorsky from Gizmodo.com:

A massive royal Wari tomb has been unearthed in Peru — and it’s full of mummies and artifacts made of silver and gold. Remarkably, the 1,200 year-old site has never been touched by looters, which is a rarity as far as these things go.

The tomb was discovered in northern Peru by Polish archaeologist Milosz Giersz and his team many months ago. But to avoid looting, they kept it a total secret. Digging quietly for months, they unearthed 63 individuals, including three Wari queens. The archaeologists suspect that some of them were human sacrifices.

The tomb, which dates back to sometime between 700 and 1,000 A.D., contains over a thousand artifacts, including sophisticated gold and silver jewelry, bronze axes, and gold tools.

The find will undoubtedly help archaeologists and anthropologists understand the life of the Wari, a vibrant civilization that lived in the Andes centuries before the rise of the Incan Empire.
National Geographic describes this “overlooked” empire:

The Wari lords have long been overshadowed by the later Inca, whose achievements were extensively documented by their Spanish conquerors. But in the 8th and 9th centuries A.D., the Wari built an empire that spanned much of present-day Peru. Their Andean capital, Huari, became one of the world’s great cities. At its zenith, Huari boasted a population conservatively estimated at about 40,000 people. Paris, by comparison, had just 25,000 residents at the time.

Just how the Wari forged this empire, whether by conquest or persuasion, is a long-standing archaeological mystery. The sheer sophistication of Wari artwork has long attracted looters, who have ransacked the remains of imperial palaces and shrines. Unable to stop the destruction of vital archaeological information, researchers were left with many more questions than answers.