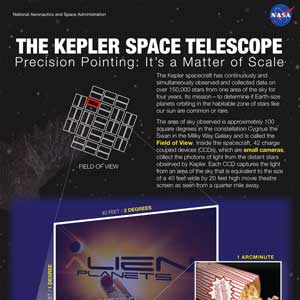 For four years, the Kepler spacecraft continuously and simultaneously observed and collected data on more than 150,000 stars. Its mission: to determine if Earth-size planets orbiting in the habitable zone of stars like our sun are common or rare.

The stability of Kepler’s pointing is measured in degrees, arcminutes, arcseconds and milli-arcseconds. To put that into perspective, the image compares the measurements using a movie theatre screen, a small bag of popcorn, a kernel of corn and a grain of salt.

During the four years of science operations, the pointing precision of the spacecraft was controlled to within a few milli-arcseconds. That is the equivalent of keeping your gaze steady on a grain of salt from a quarter mile away.

The next time you’re asked to pass the salt think of the Kepler space telescope, and share its story.