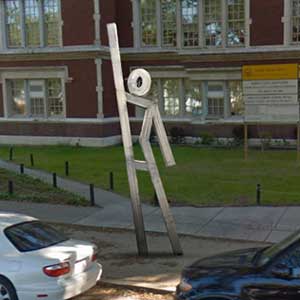 By Anya Kamenetz from FastCompany.com:

Storm season is coming soon, so look for the giant stick figure to get out of town.

When Hurricane Katrina struck in 2005, over a quarter of New Orleans households did not have access to a vehicle. Therefore nearly 100,000 people did not evacuate the city, creating hellish scenes in the Convention Center and Superdome with people stuck for days without adequate food, water, sanitation or medical care, not to mention the tragic loss of over a thousand lives in the flood itself.

Ten years and a couple of evacuations later, the city has finally introduced a solution: “City-Assisted Evacuation,” providing the elderly and others in need free pickups and rides from 17 access points in case of a large storm headed their way. But according to Evacuteer, a nonprofit that trains volunteers to help with the CAE effort, there was just one problem. The city was marking the access points with a tiny metal sign covered in fine print that looked like any old parking sign. No one was likely to notice the sites or remember them when they needed them.

They started being installed this month, in time for the official start of hurricane season June 1.

So Evacuteer raised money from hundreds of donors and commissioned an artist, Douglas Kornfeld, to create a series of 12-foot sculptures to mark each access point. They look like giant steel stick figures reaching up to hail a cab, or maybe grab some Mardi Gras beads. They started being installed this month, in time for the official start of hurricane season June 1.

“People may think the waving guys are beautiful, and others may think they’re ugly,” the director of the project, Robert Fogarty, told the New Orleans Times-Picayune. “In either scenario, they at least remember where it was—and that’s what matters.”