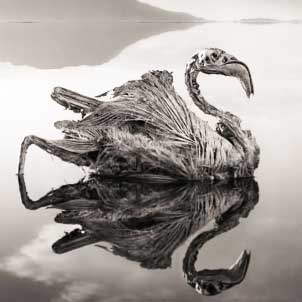 According to Dante, the Styx is not just a river but a vast, deathly swamp filling the entire fifth circle of hell. Perhaps the staff of New Scientist will see it when our time comes but, until then, Lake Natron in northern Tanzania does a pretty good job of illustrating Dante’s vision.

Unless you are an alkaline tilapia (Alcolapia alcalica) – an extremophile fish adapted to the harsh conditions – it is not the best place to live. Temperatures in the lake can reach 60 °C, and its alkalinity is between pH 9 and pH 10.5.

The lake takes its name from natron, a naturally occurring compound made mainly of sodium carbonate, with a bit of baking soda (sodium bicarbonate) thrown in. Here, this has come from volcanic ash, accumulated from the Great Rift valley. Animals that become immersed in the water die and are calcified.

Photographer Nick Brandt, who has a long association with east Africa – he directed the video for Michael Jackson’s Earth Song there in 1995 – took a detour from his usual work when he discovered perfectly preserved birds and bats on the shoreline. “I could not help but photograph them,” he says. “No one knows for certain exactly how they die, but it appears that the extreme reflective nature of the lake’s surface confuses them, and like birds crashing into plate glass windows, they crash into the lake.”

When salt islands form in the lake, lesser flamingos take the opportunity to nest – but it is a risky business, as this calcified bird (top) illustrates. The animals are all arranged in poses by the photographer. Above, on the right we have a sea eagle and on the left a dove, in what is surely the most horrific depiction of the “bird of peace” since Picasso’s Guernica.

Brandt’s new collection of photos featuring animals in east Africa, Across the Ravaged Land, is published by Abrams Books.