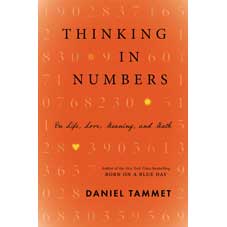 By Daniel Tammet from slate.com:

The following is an excerpt from Thinking in Numbers: On Life, Love, Meaning, and Math, by Daniel Tammet, out now from Little, Brown.

Ask an Icelander what comes after three and he will answer, “Three what?” Ignore the warm blood of annoyance as it fills your cheeks, and suggest something, or better still, point. “Ah,” our Icelander replies. Ruffled by the wind, the four sheep stare blankly at your index finger. “Fjórar,” he says at last.

However, when you take your phrase book—presumably one of those handy, rain-resistant brands—from your pocket and turn to the numbers page, you find, marked beside the numeral four, fjórir. This is not a printing error, nor did you hear the Icelander wrong. Both words are correct; both words mean “four.” This should give you your first inkling of the sophistication with which these people count.

Icelanders have highly refined discrimination for the smallest quantities. “Four” sheep differ in kind from “four,” the abstract counting word. No farmer in Hveragerði would ever dream of counting sheep in the abstract. Nor, for that matter, would his wife or son or priest or neighbor. To list both words together, as in a textbook, would make no sense to them whatsoever.

This numerical diversity applies not only to sheep. Naturally enough, the woolly mammals feature little in town dwellers’ talk. Like you and me, my friends in Reykjavík talk about birthdays and buses and pairs of jeans but, unlike in English, in Icelandic these things each require their own set of number words.

For example, a toddler who turns 2 is tveggja years old. And yet the pocket phrase book will inform you that “two” is tveir. Age, abstract as counting to our way of thinking, becomes in Icelandic a tangible phenomenon. Perhaps you too sense the difference: The word tveggja slows the voice, suggesting duration. We hear this possibly even more clearly in the word for a 4-year-old: fjögurra. Interestingly, these sounds apply almost exclusively to the passage of years— the same words are hardly ever used to talk about months, days, or weeks. Clock time, on the other hand, renders the Icelander almost terse as a tick: the hour after one o’clock is tvö.

What about buses? Here numbers refer to identity rather than quantity. In Britain or America, we say something like, “the No. 3 bus,” turning the number into a name. Icelanders do something similar. Their most frequent buses are each known by a special number word. In Reykjavík, the No. 3 bus is simply þristur (whereas to count to three the Icelander says “þrír”). Fjarki is how to say “four” when talking buses in Iceland.

A third example is pairs of something—whether jeans or shorts, socks or shoes. In this case, Icelanders consider “one” as being plural: einar pair of jeans, instead of the phrase book einn.

In English, I would suggest, numbers are considered more or less ethereal—as categories, not qualities. Not so the smallest numbers in Icelandic. It is as though each corresponded to a delicate nuance of color. Where the English word red is abstract, indifferent to its object, words like crimson, scarlet, and burgundy possess their own particular shade of meaning and application.

We can only speculate as to the reason why Icelanders stop at the number five (for which, like every number thereafter, a single word exists). According to psychologists, humans can count in flashes only up to quantities of four. We see three buttons on a shirt and say “three”; we glance at four books on a table and say “four.” No conscious thought attends this process—it seems to us as effortless as the speech with which we pronounce the words. The same psychologists tell us that the smallest numbers loom largest in our minds. Asked to pick a number between one and 50, we tend toward the shallow end of the scale (far fewer say “40” than “14”). It is one possible explanation for why only the commonest quantities feel real to us, why most numbers we accept only on the word of a teacher or textbook. Forty, to us, is but a vague notion; 14, on the other hand, is a quantity within our reach. Four, we recognize as something solid and definite. In Icelandic, you can give your baby the name “Four.”

This profusion of Icelandic words for the purpose of counting appears to be an exception to the rule. Many of the world’s tribal languages, in contrast, make do with only a handful of names for numbers. The Veddas, an indigenous people of Sri Lanka, are reported to have only words for the numbers one (ekkamai) and two (dekkamai). For larger quantities, they continue: otameekai, otameekai, otameekai … (“and one more, and one more, and one more … ”). Another example is the Caquintes of Peru, who count one (aparo) and two (mavite). Three they call “it is another one”; four is “the one that follows it.”

In Brazil, the Munduruku relay quantity by according an extra syllable to each new number: one is pug, two is xep xep, three is ebapug, and four is edadipdip. They count, understandably, no higher than five.

All this may sound almost incomprehensible for those brought up speaking languages that count to thousands, millions, and beyond, but it does at least make the relationship between a quantity and its appointed word sound straightforward and conventional. Quite often, though, it is not. In many tribal languages, we find that the names for numbers are perfectly interchangeable, so that a word for “three” will also sometimes mean “two,” and at other times “four” or “five.” A word meaning “four” will have “three” and “five”—occasionally “six”—as synonyms.

There is a tribe in the Amazon rain forest that knows nothing whatsoever of numbers. Their name is the Pirahã or the Hi’aiti’ihi, meaning “the straight ones.” Surrounded by throngs of trees, their small clusters of huts lie on the banks of the Maici River. Tumbling gray rain breaks green on the lush foliage and long grass.

Manioc (a tough and bland tuber), fresh fish, and roasted anteater sustain the population. The work of gathering food is divided along lines of sex. At first light, women leave the huts to tend the manioc plants and collect firewood, while the men go upriver or downriver to fish. They can spend the whole day there, bow and arrow in hand, watching the water. For want of means of storage, any catch is consumed quickly. The Pirahã apportion food in the following manner: Members of the tribe haphazardly receive a generous serving until no more remains. Any who have not yet been served ask a neighbor, who has to share. This procedure only ends when everyone has eaten his fill.

The vast majority of what we know about the Pirahã is due to the work of Daniel Everett, a Californian linguist who has studied them at close quarters over a period of 30 years. With professional perseverance, he gradually heard their cacophonic ejections as comprehensible words and phrases, becoming in the process the first outsider to embrace the tribe’s way of life.

To Everett’s astonishment, the language he learned has no specific words for measuring time or quantity. Names for numbers like “one” or “two” are unheard of. Even the simplest numerical queries brought only confusion or indifference to the tribesmen’s eyes. Of their children, parents are unable to say how many they have, though they remember all their names. Plans or schedules older than a single day have no purchase on the Pirahã’s minds. Bartering with foreign traders simply consists of handing over foraged nuts as payment until the trader says that the price has been met.

It seems the Pirahã make no distinction between a man and a group of men, between a bird and a flock of birds, between a grain of manioc flour and a sack of manioc flour. Everything is either small (hói) or big (ogii). A solitary macaw is a small flock; the flock, a big macaw. In his Metaphysics, Aristotle shows that counting requires some prior understanding of what “one” is. To count five or 10 or 23 birds, we must first identify one bird, an idea of “bird” that can apply to every possible kind. But such abstractions are entirely foreign to the tribe.

Lest anyone should think tribes such as the Pirahã somehow lacking in capacity, allow me to mention the Guugu Yimithirr of north Queensland in Australia. In common with most aboriginal language speakers, the Guugu Yimithirr have only a handful of number words: nubuun (one), gudh-irra (two), and guunduu (three or more). This same language, however, permits its speakers to navigate their landscape geometrically. A wide array of coordinate terms attune their minds intuitively to magnetic north, south, east, and west, so they develop an extraordinary sense of orientation. For instance, a Guugu Yimithirr man would not say something like, “There is an ant on your right leg,” but rather “There is an ant on your southeast leg.” Or, instead of saying, “Move the bowl back a bit,” the man would say, “Move the bowl to the north-northwest a bit.”

We are tempted to say that a compass, for them, has no point. But at least one other interesting observation can be drawn from the Guugu Yimithirrs’ ability. In the West, young children often struggle to grasp the concept of a negative number. The difference between the numbers two (2) and minus two (-2) often evades their imagination. Here the Guugu Yimithirr child has a definite advantage. For two, the child thinks of “two steps east,” while minus two becomes “two steps west.” To a question like, “What is minus two plus one?” the Western child might incorrectly offer, “Minus three,” whereas the Guugu Yimithirr child simply takes a mental step eastward to arrive at the right answer of “one step west” (-1).

The Kpelle tribe of Liberia offers a final example of culture’s effect on how a person counts. The Kpelle have no word in their language corresponding to the abstract concept of “number.” Counting words exist but are rarely employed above 30 or 40. One young Kpelle man, when interviewed by a linguist, could not recall his language’s term for 73. A word meaning “100” frequently stands in for any large amount.

Counting people directly is believed by the Kpelle to bring bad luck. In Africa, this taboo is both ancient and widespread. There exists as well the sentiment, shared by the authors of the Old Testament, that the counting of human beings is an exercise in poor taste. The simplicity of their number words is not only a question of language; it also reveals an ethical dimension.

I read with pleasure a book of essays published several years ago by the Nigerian novelist Chinua Achebe. In one, Achebe complained of the Westerners who asked him, “How many children do you have?” Rebuking silence, he suggested, best answered such an impertinent question. “But things are changing and changing fast with us … and so I have learned to answer questions that my father would not have touched with a bargepole.”