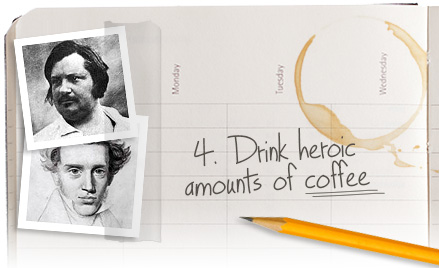 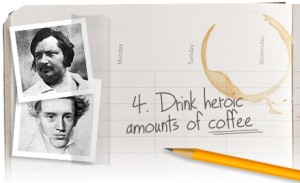 By Mason Currey at Slate.com:

Coffee! It is the great uniting force of my Daily Rituals book. It’s what brings together Beethoven and Proust, Glenn Gould and Francis Bacon, Jean-Paul Sartre and Gustav Mahler. This should hardly be surprising. Caffeine is the rare drug that has a powerful salutary effect—it aids focus and attention, wards off sleepiness, and speeds the refresh rate on new ideas—with only minimal drawbacks. And the ritual of preparing coffee serves for many as a gateway to the creative mood. Balzac wrote:

Coffee glides into one’s stomach and sets all of one’s mental processes in motion. One’s ideas advance in column of route like battalions of the Grande Armée. Memories come up at the double, bearing the standards which will lead the troops into battle. The light cavalry deploys at the gallop. The artillery of logic thunders along with its supply wagons and shells. Brilliant notions join in the combat as sharpshooters. The characters don their costumes, the paper is covered with ink, the battle has started, and ends with an outpouring of black fluid like a real battlefield enveloped in swaths of black smoke from the expended gunpowder. Were it not for coffee one could not write, which is to say one could not live.