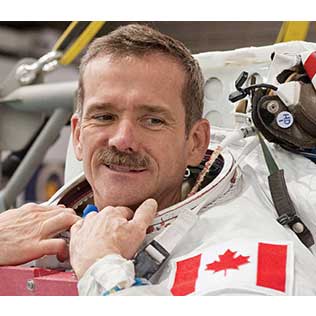 By Kate Lunau from Macleans.com:

Hadfield saw space and Earth as if they were brand-new and shared his experience aboard the ISS with millions.

On May 13, as the Toronto Maple Leafs faced off against the Boston Bruins in Game 7 of their Stanley Cup playoff series, the Russian Soyuz spacecraft was undocking from the International Space Station (ISS). Crammed inside like sardines were Chris Hadfield and his crewmates, American Tom Marshburn and Russian Roman Romanenko, returning home after five months in space. Underneath his spacesuit, Hadfield was wearing a Leafs T-shirt to support his favourite team. The Soyuz sliced down into the atmosphere and began to slow, subjecting the astronauts to a punishing 4 Gs—four times Earth’s gravity—and making their limbs feel leaden, their breathing laboured: a harsh reintroduction to gravity after the weightlessness of space. As the Soyuz dropped to its landing site on a Kazakhstan plain, search-and-rescue helicopters were circling.

The capsule hit the ground with the force of a car crash, tipping over onto its side. “I was hanging from the ceiling,” Hadfield says. “Roman was in the middle, and Tom was lying on the floor.” Marshburn looked out the window, and saw “dirt and grass where space had been just moments before.” The search-and-rescue team pried open the hatch and Hadfield and his crew were greeted by the scent of springtime, mixed with the burnt smell of their charred spaceship.

Dr. Raffi Kuyumjian, Hadfield’s flight surgeon, was one of three Canadian Space Agency (CSA) people in Kazakhstan. (Hadfield’s wife, Helene, was watching from mission control in Houston.) After the astronauts had been lifted from the spacecraft and were seated, draped in blankets, Kuyumjian said, “The first thing I did was dial Helene on my cell and give it to Chris.” He and Helene assured each other they were fine, then Hadfield asked: “How’d the Leafs do?” She broke the news that his team had lost in overtime. With that, Canada’s first space commander was truly brought back to Earth.

Since blasting off to the ISS on Dec. 19, Hadfield has become the most celebrated astronaut alive, one destined for a spot alongside his hero, Neil Armstrong, whose 1969 moon landing inspired his own career. But while half a billion people watched Armstrong climb out of the lunar lander and set foot on the moon, this is a more cynical time—one less impressed by technological achievement. People have lived and worked aboard the ISS continuously since 2000, and visiting low-Earth orbit isn’t as exotic as walking on the moon, let alone Mars or beyond. It’s a wonder that a Canadian astronaut like Hadfield could catch anyone’s attention, let alone captivate millions around the world. Yet, however improbably, that’s what he did.