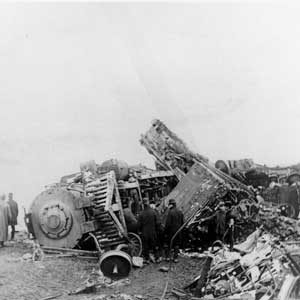 These photos, all of which depict train wrecks on the New York Ontario & Western Railway in New York State in the 1870s, are part of a larger group of images of railroad life assembled by De Forest Douglas Diver, a railroad engineer and photographer.

This collection is currently held at Cornell University, and many of the photographs are available for view on Flickr. Some of these images are quite aesthetically pleasing, despite their subject matter. The wreck of N.Y.O. & W. Engine 140, in particular, is framed as a near-perfect pyramid, with six onlookers (including one babe in arms) decorating the pile of broken steel. Other images show the crews of laborers it took to get the rubble off the track after the violence of a crash.

Little information is available about these wrecks beyond their dates. Historian Richard Selcer writes that although 19th-century railroad accidents were distressingly common, it’s hard to arrive at an official tally, because record-keeping was informal: “Companies were not even required to report all collisions and derailments until 1901, when the Interstate Commerce Commission assumed control over railroad safety standards.”

Two of the photos show an 1870 wreck that sent a train into the water along with part of the bridge it was traversing. Users on Cornell’s Flickr site propose that this might be the wreck at the hamlet of Fish’s Eddy, on the Delaware River (part of the town of Hancock, N.Y.).

Contemporary newspaper coverage of this accident reported a derailment caused by a 4-foot broken rail. The caboose struck the rail, and went “bumping along the ties” until its weight dragged the next car off the track:

Striking the bridge, [the car] knocked the span off the abutment and, with a tremendous crash, precipitated two cars and one span of the bridge about 150 feet in length, into the river, and threw the caboose to one side of the abutment from which it jumped, a distance of 40 feet into the river bed, landing bottom side up and immediately taking fire.

Four workers who were trapped in the caboose died. The wreck, the newspaper reporter added, “will cost the company about $25,000.”