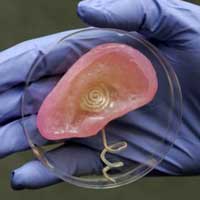 By Liat Clark from Wired.com:

Nanotechnology engineers from Princeton have 3-D printed an ear from calf cells and silver nanoparticles that picks up radio signals at frequencies beyond human capacity. The creation is part of their greater plan to one day build spare parts for human cyborgs.

Rather than simply adding electronics to an ear, the team decided to try and integrate the two from the start. They 3-D printed hydrogel — a polymer-based gel often used as scaffolding in tissue engineering – with calf cells, and weaved in silver nanoparticles to create an built-in antenna coil that replaces the cochlea. The calf cells matured to become cartilage and the electronics were then encased in a highly supportive ear that mirrors the complex build of the real thing.

It might not be the prettiest of inventions, looking a little like Freddie Krueger’s lost ear, but this bionic creation can pick up radio frequencies beyond human abilities, after the antenna is attached to electrodes.

“The printed ear exhibits enhanced auditory sensing for radio frequency reception, and complementary left and right ears can listen to stereo audio music,” the authors write in a paper on the study in Nano Letters.

This is really a proof of concept endeavor for the Princeton team. It’s not planning on sewing its bionic ears on to human heads anytime soon — though research leader Michael McAlpine says it could, in theory, be connected to nerve endings like hearing aids are. For now, the challenge they have set themselves is to generate new techniques for building potential cyborg parts.

“Biological structures are soft and squishy, composed mostly of water and organic molecules, while conventional electronic devices are hard and dry, composed mainly of metals, semiconductors and inorganic dielectrics,” coauthor on the paper David Gracias from John Hopkins said. “The differences in physical and chemical properties between these two material classes could not be any more pronounced.”

Choosing to replicate an ear was also ambitious — it’s one of the most complex and intricate shapes to engineer from scratch. In a study announced in February of this year, a team from Cornell got around this by  3-D printing a mould in the shape of an ear, before filling it with a gel made of living cells. Meanwhile, it was announced in November 2012 that we can now in fact 3-D print cartilage using a combination of electrospun fiber and cartilage cells. It makes sense that in the advent of these techniques, combined with the rising popularity and interest in bionic eyes and wearable electronics, researchers have begun looking at the possibilities for one day replacing all manner of organs with potentially superior parts.

“This field has the potential to generate customized replacement parts for the human body, or even create organs containing capabilities beyond what human biology ordinarily provides,” the paper states.

In future incarnations, the team hopes to install pressure-sensitive electronic sensors so that it might hear acoustic sounds similar to how a real ear does.