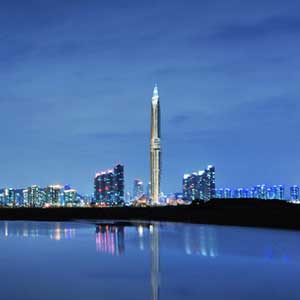 By Kyle VanHemert from wired.com:

South Korea recently granted construction permits for the Infinity Tower, a proposed skyscraper that can disappear with the push of a button.

If you’re one of those people who usually think new skyscrapers are ostentatious eyesores, the Infinity Tower, a 1,500-foot entertainment complex proposed for Cheongna, Korea, will offer a little bit of solace: It will only be an eyesore some of the time. Using a sophisticated system of cameras and LEDs, the building is designed to disappear with the push of a button.

The technological premise is the same one you see trotted out every so often for prototype invisibility cloaks: Cameras on one side of the building will project an image to screens on the other. Through careful consideration of viewing angles, the folks at GDS Architects think they’ve worked out how to create the most dramatic effect possible for pedestrians while remaining in the bounds of architectural and fiduciary reality. In a statement, GDS president Charles Wee said, “Instead of symbolizing prominence as another of the world’s tallest and best towers, our solution aims to provide the world’s first invisible tower.” It will also have the world’s third highest observation deck.

The design, which beat out 140 others in a 2008 and recently received construction permits from the Korean government, calls for 16 weatherproof cameras distributed at three different heights on the skyscraper’s skin. The images they capture will then be digitally processed to account for the structure’s shape and beamed out the other side across 1,500 LED strips. The facade was designed with pedestrians in mind–the arrangement of the cameras and LEDs is based on the precise angles from various viewing points around Incheon’s Cheongna district, about 20 miles west of Seoul, where the building will sit. The effect would only be activated for a few hours a day, when weather conditions permitted–the lights inside the 450-meter tall tower make after-hours invisibility impossible. In certain conditions, the tower could effectively disappear.

There are other hurdles. Tests on the technology still have to be conducted. While the permits have been issued, more funding needs to be secured. Also potentially complicating the idea of a gigantic invisible glass tower: The site’s just a few miles from the Incheon International Airport.

And yet, we dare to dream. It makes sense, in a way, that a building might be easier to cloak than, say, a tank–the surfaces are bigger and broader and easier to cover with screens. Of course, it’s worth mentioning that the technology here is double-edged sword. In a brief on the building’s unusual design, GDS points out that the same technology allowing the tower to melt away into the horizon will also allow it to function as a “450-meter-tall billboard screen.” Hopefully they won’t have to resort to that to find their funding.