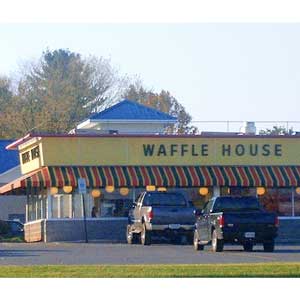 When disaster strikes, swift and decisive actions are typically required. Waffling — as in equivocating – is probably not a good idea. But waffles, the food?  In the United States, they are a leading indicator as to how bad a disaster is.

On May 22, 2011, a multiple-vortex tornado with winds breaking 200 miles per hour hit the town of Joplin, Missouri. The city was ravaged, with over 150 people killed and nearly 1,000 injured. An estimated 10-25% of the city demolished, depending on which report one goes by. Roughly 2,000 commercial buildings were destroyed and another 7,500 houses were as well. In total, the insurance claims from the damage will pay out over $2 billion.

Fugate was well prepared to help assist in the recovery; he is well experienced when it comes to disasters. A former firefighter, Fugate ran Florida’s emergency response programs in the early part of this century, overseeing recovery from multiple hurricanes as well as floods, wildfires, tornadoes, and the like.  He was appointed to the head of FEMA by President Obama in 2009 — a position he had held since.  His decades of emergency management mean we should probably take his ideas seriously, even if they sound ridiculous on their face.  Which brings us back to waffles.

With such carnage hitting Joplin, it would take a miracle for any businesses to have figured out a way to remain open.  Or, if not a miracle, a detailed, proven disaster action plan — which is what the two Waffle Houses in the town had in place.  As discussed by safety publication EHS Today, these all-day breakfast restaurants have business plans in place which help them stay open.  A Waffle House affected by disaster can quickly determine which employees are able to make it in; have temporary food storage areas ready for action; and have secondary, limited menus available in such a situation.  And in Joplin, both of the Waffle Houses remained open for business.

Fugate observed that Waffle Houses were able to defy the will of nature. He used this curiosity to create a back-of-envelope disaster rating system, one which resonated colloquially, called the “Waffle House Index.”  A “green” rating means that the Waffle Houses are open, with full menus, minimal to no damage, and with working power.  A “yellow” rating means that the restaurant is serving a limited menu, indicating low food supplies and/or struggles with power (perhaps the establishment is using a backup generator).

And when the Waffle House is closed?  The Waffle House Index hits a “red” rating.  That’s rare, and, as Fugate noted in a speech (per Christian Science Monitor), “that’s really bad. That’s where you go to work.”

But don’t worry — even though the Waffle House Index in Joplin only hit yellow, FEMA and other emergency response teams were there anyway.

Bonus fact: Waffle Houses serve breakfast all day.  McDonalds does not — they stop serving breakfast foods at about 11 A.M., depending on individual franchises.  Why? Because the breakfast foods cook at a lower grill temperature than the regular burgers-and-sandwiches (but not hot dogs) menu; once the grill is turned up, breakfast can no longer be prepared.