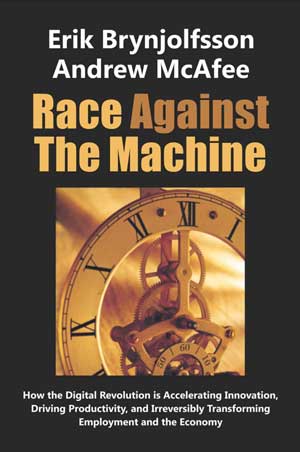 How will a mass influx of robots affect human employment?

In the book Race Against the Machine, Erik Brynjolfsson and Andrew McAfee of MIT’s Sloan School of Management present a chart showing U.S. productivity, GDP, employment, and income from 1953 to 2011. The chart looks as you would expect from 1953 until the mid-1980s, with every one of the measures rising together: employees work more productively, companies make more money, and more hires occur as the middle class swells.Then, during Reagan’s tenure, the bad news begins to show its face. First, even though productivity and GDP continue their upward arc, median household income starts to level off. That is unsettling, since it suggests that companies can get richer and yet employees can stop benefiting from increasing GDP: what happened to trickle-down? A decade later, in the mid-1990s, more trouble crops up: employment flattens as GDP and productivity continue even faster growth.Brynjolfsson and McAfee argue that these are signs of a true sea change in the dynamics of productivity and employment. Contrary to popular conceptions that all we need is more technological innovation to increase employment, they argue, technological innovation is itself among the forces behind the change.

The elephant in the room is how robotics will play out for human employment in the long term. New robots will take on advanced manufacturing, tutoring, scheduling, and customer relations. They operate equipment, manage construction, operate backhoes, and yes, even drive tomorrow’s cars.

It is time for not just economists but roboticists, like me, to ask, “How will robotic advances transform society in potentially dystopian ways?” My concern is that without serious discourse and explicit policy changes, the current path will lead to an ever more polarized economic world, with robotic technologies replacing the middle class and further distancing our society from authentic opportunity and economic justice.

So how do we deal with the impending mass migration of robots into our middle class? Perhaps we should start by talking about it over dinner (robots don’t eat with us yet). I submit to you four dinnertime conversation starters, each of which I believe captures something essential to understanding why the impending Robot Revolution may be nothing like the Industrial Revolution.

Robots won’t have to be as good as the humans they replace.

Consider the automated checkout line at your local grocery store. It makes more mistakes than a human clerk, it is harder to use, and it is slower because of the rotating error light that loves to interrupt the whole process every few minutes. Is it better than a human? Of course not. It is simply good enough. And so begins the march of mediocre robots that can defensibly replace humans, not because they advantage the customer, but because they save money for a corporation. Robots will be able to fix your car poorly before they can fix it well. They will cook food that is bland and mealy before they garner a Michelin star. But they will take on middle-class jobs and win, not because of their qualitative merits, but because they look good in the antiseptic light of financial balance sheets.

Take a look at the new robot Baxter, from Rethink Robotics. It is Baxter’s price tag—$20,000—that makes it potentially revolutionary. The return on investment for a company that replaces a single human employee is realized before year’s end. Does Baxter need to do everything the laid-off human could have done? Not quite. It just has to do enough to justify the replacement: one machine for one warm body’s fractional salary.

Some robots will be better than the humans they replace.

Then there is a more threatening issue: robots are improving in performance far faster than humans. We are stuck with an evolutionary timetable that is glacial, whereas computer vision is rapidly moving from amoeba to insect. We face a future in which robots will be better than humans in entire job categories—that is simply a matter of time. The Atlantic’s Adam Davidson writes about a uniquely specific example of robo-specialization in “Making It in America.” The question is, as this frontier collides with the reality of massive employment numbers in particular categories, do we justify machine replacement and presume to conduct a great deal of retraining? The frontier is ever-moving, and the retraining will be never-ending. This is an even harder question of identity for our civilization: is chronic underemployment a fact that cannot be changed because robots will be demonstrably better than we are, or do we have a responsibility to influence the advance of automation for the sake of some greater good?

Merging human and robot abilities is another employment threat.

One truism of robotics is that not all aspects of human ability are being copied equally. However, so long as artificial intelligence is so artificial, maybe our natural intelligence provides us with a special station that robots cannot overcome. Sadly, such reasoning does not really improve the prospect of chronic underemployment. Outstanding research in telepresence promises to enable robots to act with guidance from humans. They can phone home when facing a tough decision, and humans can provide the eyes and brains while a robot wields the brute strength. As we research human-robot control systems, not least of all for robotic war-fighting drones, we learn how to patch a single person’s brains and problem-solving powers into many robots at once. A whole factory of thinking humans could be replaced by unthinking robots so long as they had that drone interface, asking for just-in-time problem-solving help from a human supervisor when needed. Give companies a great human-robot interface and a whole pallet of dumb robots, and you still have an underemployment crisis.

Imagining the possible future scenarios for middle-class unemployment is a first step to considering ways in which we can preserve our quality of life given the robotic future that will meet us. Without doubt, robots can greatly improve many lives, offering everything from smart prosthetics to home care for the aging. But for humans, the robot future is a mixed bag. It is up to us to formulate a conversation about how the employment impact of robotic technologies will inform the cycle of innovation and business change that we will witness. If we actually pay attention, then we just might have a chance to future-proof the middle class.

Illah Nourbakhsh is a professor of robotics at Carnegie Mellon University. His latest book is Robot Futures, published by MIT Press.