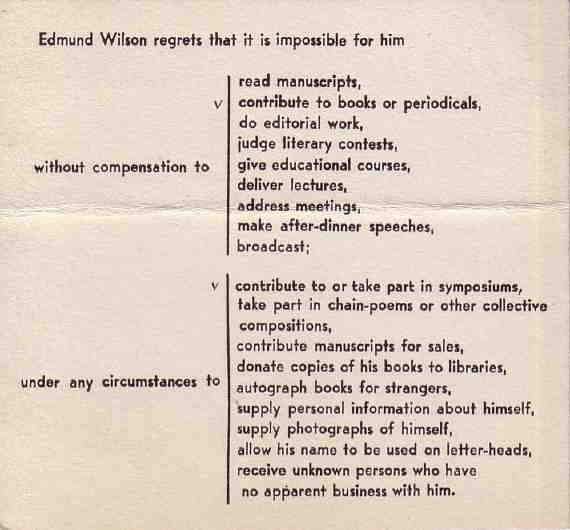 Edmund Wilson, recipient of both the Presidential Medal of Freedom and the National Medal for Literature, was one of the most prominent social and literary critics of the 20th century.

He realized, like most uber-productive people, that, while there were many behaviors needed to guarantee high output, there was one single behavior guaranteed to prevent all output:

Trying to please everyone.

He had a low tolerance for distraction and shunned undue public acclaim. To almost all inquiries, he would respond with the following list, putting a check mark next to what had been requested… But Edmund was no hermit. He was sociable. His writing, honed at Vanity Fair, The New Yorker and The New Republic, also played a large role in introducing F. Scott Fitzgerald (a friend who referred to Edmund as his “intellectual conscience”), Ernest Hemingway, and William Faulkner to the mainstream public.

Though he was thought stubborn and prone to odd whims, a perception no doubt encouraged by his auto-response, he had his good friends and got more done in years than most will get done in a lifetime.