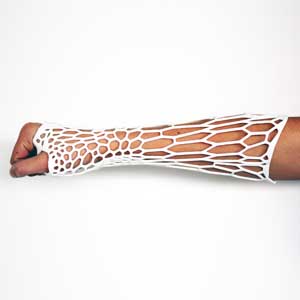 3D-printed casts for fractured bones could replace the usual bulky, itchy and smelly plaster or fibreglass ones in this conceptual project by Victoria University of Wellington graduate Jake Evill.

The prototype Cortex cast is lightweight, ventilated, washable and thin enough to fit under a shirt sleeve. A patient would have the bones x-rayed and the outside of the limb 3D-scanned. Computer software would then determine the optimum bespoke shape, with denser support focussed around the fracture itself.

The polyamide pieces would be printed on-site and clip into place with fastenings that can’t be undone until the healing process is complete, when they would be taken off with tools at the hospital as normal. Unlike current casts, the materials could then be recycled. “At the moment, 3D printing of the cast takes around three hours whereas a plaster cast is three to nine minutes, but requires 24-72 hours to be fully set,” says the designer. “With the improvement of 3D printing, we could see a big reduction in the time it takes to print in the future.”

He worked with the orthopaedic department of his university on the project and is now looking for backing to develop the idea further. Jake Evill has just graduated from the Architecture and Design faculty at Victoria University of Wellington, with a Major in Media Design and a Minor in Industrial Design.

Read more about how 3D printing is transforming healthcare in an extract from our one-off publication Print Shift, including bespoke prothetic limbs and printed organs for transplants.

Here’s some more information from Evill:

After many centuries of splints and cumbersome plaster casts that have been the itchy and smelly bane of millions of children, adults and the aged alike, the world over, we at last bring fracture support into the twenty-first century.

The Cortex cast utilises the x-ray and 3D scan of a patient with a fracture and generates a 3D model in relation to the point of fracture.