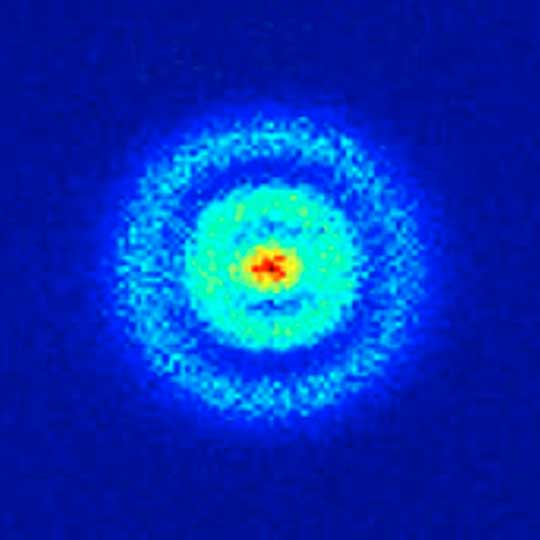 An orbital structure is the space in an atom that’s occupied by an electron. But when describing these super-microscopic properties of matter, scientists have had to rely on wave functions — a mathematical way of describing the fuzzy quantum states of particles, namely how they behave in both space and time. Typically, quantum physicists use formulas like the Schrödinger equation to describe these states, often coming up with complex numbers and fancy graphs.

Up until this point, scientists have never been able to actually observe the wave function. Trying to catch a glimpse of an atom’s exact position or the momentum of its lone electron has been like trying to catch a swarm of flies with one hand; direct observations have this nasty way of disrupting quantum coherence. What’s been required to capture a full quantum state is a tool that can statistically average many measurements over time.

But how to magnify the microscopic states of a quantum particle? The answer, according to a team of international researchers, is the quantum microscope — a device that uses photoionization microscopy to visualize atomic structures directly.

Writing in Physical Review Letters, Aneta Stodolna of the FOM Institute for Atomic and Molecular Physics (AMOLF) in the Netherlands describes how she and her team mapped the nodal structure of an electronic orbital of a hydrogen atom placed in a static (dc) electric field.

After zapping the atom with laser pulses, ionized electrons escaped and followed a particular trajectory to a 2D detector (a dual microchannel plate [MCP] detector placed perpendicular to the field itself). There are many trajectories that can be taken by the electrons to reach the same point on the detector, thus providing the researchers with a set of interference patterns — patterns that reflected the nodal structure of the wave function.

And the researchers managed to do so by using an electrostatic lens that magnified the outgoing electron wave more than 20,000 times.

Image: Examples of four atomic hydrogen states. The middle column shows the experimental measurements, while the column at right shows the time-dependent Schrödinger equation calculations — and they match up rather nicely.

Looking ahead, the researchers plan on using the same technology to look at how atoms react within a magnetic field.

You can read the entire study at Physical Review Letters: “Hydrogen Atoms under Magnification: Direct Observation of the Nodal Structure of Stark States.”