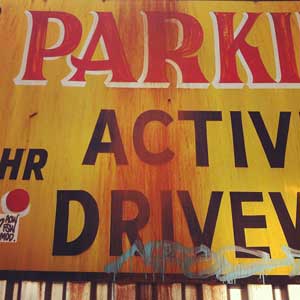 New York City is such a sensory overload, it’s easy to miss the details — like the graphical symphony of typography that’s playing under your visual field.

Nyctype.com aims to bring that symphony to the surface by capturing all the different typefaces that plaster the walls of New York City in an Instagram hashtag. From signs to posters to handbills, the site, which launched this week, hopes to highlight the ways in which letters and words help give New York a particular aesthetic and character.

“I feel like cataloging [the typography] is a celebration of the craft of design and of the city,” says Matthew Anderson, the site’s editor [continued below]. Anderson, 33, along with a couple of friends, started a similar blog back in 2007 but it was too sporadically updated. Now, thanks to more camera phones, Instagram and hashtags, they’ve found a solution. Their current site uses Instagram’s API and culls any photo with the hashtag #nyctype. Their contributor pool has, predictably, grown, and hundreds of submissions have already rolled in.

Anderson says he keyed in on typography because it’s an important part of every New Yorker’s daily life. Residents there are bombarded with visual messages. Unfortunately, he says, the uniqueness of the signs that fill the boroughs has been diminishing. Hand painted displays used to be more common but are on the decline and he’s personally on a mission to document as many of these one-offs before they disappear. He prefers the hand painted signs because he thinks there’s an art and certain amount of humanity to them. For him, the mass-produced or more corporate-looking signs that now dominate the city have less soul. (While graffiti makes its way onto the hashtag, it’s not Anderson’s focus).

“We have a visual culture that is erupting but it’s often guided by people who care more about marketing and less about design,” he says.

Down the road, Anderson says he’d like to find a streamlined way to incorporate higher-res photos taken by people with DSLRs. Including video is also a possibility. Beyond that, he’s thinking about white-labeling his website as a platform for general hashtag curation.

“My passion is typography,” he says. “But I realize that this is one of those ideas that could be used for any topic.”