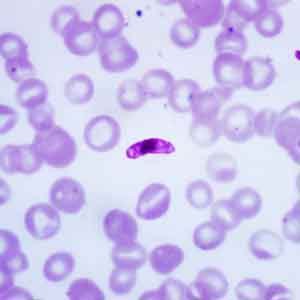 By Rachel Nuwer from slate.com:

This digitally colorized micrograph shows the underside of a bedbug, Cimex lectularius. From this view you can see the insect’s skin-piercing mouthparts it uses to obtain its blood meal, as well as a number of its six-jointed legs.
Photo by Media for Medical/Haney Carr J./UIG via Getty Images

Parasites are all around us—humans alone have more than 100—yet they receive little attention. That should change, says ecologist Kevin Lafferty.

Why did you choose to focus your work on parasites, the least loved of creatures?
I wasn’t interested in parasites until I was asked to be a teacher’s assistant for a parasitology course. I hadn’t taken the course; I was totally disgusted by the subject. But I became fascinated when we brought in fish, sharks and invertebrates for the students to dissect. As a marine biologist, I thought I knew pretty much everything about these organisms. Yet no one ever told me to look inside them for parasites. When we did, we found lots of species. It struck me that an entire component of my education had been neglected. At that point I decided that there’s a real need to know more about the role of parasites.

How significant are parasites in nature?
We don’t know for sure, but we do know that parasitism is the most popular lifestyle on Earth. Most animal species are probably parasitic. For humans alone, there are more than 100 host-specific parasites. Among described species on the planet, the ratio of free-living to parasitic is about 60:40, but that’s a gross underestimate. In reality the numbers are probably much more in favor of the parasites.

If they are so prevalent, why don’t they get more attention?
Almost all intellectual effort focused on parasites is directed at how we can kill and prevent them. That’s not the best way to get an insight into their ecological role. Early ecologists were well aware of parasites, but in more modern times, that aspect of thinking was dropped. There has been little training to look inside organisms. Fortunately that has changed in the last 10 years and we have seen an incredible surge of interest.

How important are parasites to ecosystems?
Parasites are integral, basic components. The more intact the ecosystem, the more parasites you tend to find there. That can be shocking to people, who usually think parasites are a sign that a system is out of balance. In general, though, we tend to find lots of parasites in pristine places. But I don’t want to sound romantic about parasites and tell you they are great—I mean, they are our enemies. Anybody with parasites doesn’t harbor any warm feelings towards them.

How will climate change affect parasites?
For free-living species, what we expect to see with climate change is that there will be some winners and some losers. Parasites, for the most part, are going to follow similar patterns. They will shift ranges, and those that can’t will be reduced as a consequence. For example, the whole map of malaria risk in Africa is likely to change, but not necessarily become worse. That’s a pretty controversial statement to make because there has been an awful lot written about how climate change is going to lead to a sicker world.

Have you been host to any interesting ones?
My first experience with a parasite was at summer camp when I had a tick on my testicle. It was emotionally scarring. All the kids looked on as a camp counselor burned the tick off with a match.

Dash is the world’s first foldable, programmable, origami robot that you can build yourself! Inspired by nature, Dash runs like the world’s fastest animals. Dash fits in the palm of your hand and is so lightweight that you can run him off of tables or even buildings and he just keeps going! See our video [below] for more info, or contact us!