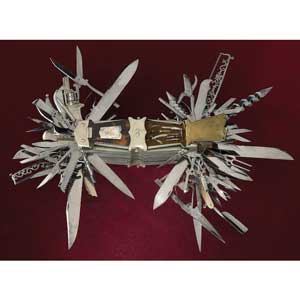 This multi-bladed folding knife was made in Germany around 1880. Image: Smithsonian’s National Museum of American History The F.W. Holler Company manufactured it to be a demonstration piece to show off its products. Image: Smithsonian’s National Museum of American History These are miniature, 1-inch replicas of the tools Holler made. It’s not entirely known why they exist. Image: Smithsonian’s National Museum of American History

Most Swiss Army knives could be pressed into service as a weapon. They have a pocket knife and a corkscrew with a decently sharp end. Even that nail file could do some damage if you really wanted it to. But all of that stuff starts to look pretty innocent—cute even!—when placed next to the multi-tool gadget you see above. Just take a moment to appreciate its absurd complexity. This amped-up Swiss Army-style knife has 100 functions, which is a demure way to say there are 100 very scary looking blades of different varieties packed into its 10-inch handle. Oh, and did you notice the fully-functioning .22-caliber pin-shot revolver tucked in between the shears and dagger? This is, simply put, the most badass Swiss Army knife ever created.

Solingen was appropriately nicknamed the City of Blades.

There’s a story behind this bizarre and beguiling piece of weaponry. Oddly enough, the craziest Swiss Army style-knife to ever exist wasn’t even made in Switzerland, explains David Miller, an associate curator of armed forces history at the National Museum of American History. A product of the F.W. Holler Company, the knife was actually manufactured in Solingen, Germany, a medium-sized town in the North Rhine region of the country. Solingen, appropriately nicknamed the City of Blades, has been home to some of the most finely crafted knives, swords and shears since the Middle Ages, though it’s now better known for its quality flatware. It was here in the late 1870s, in the cutlery capital of the world, that John S. Holler decided to expand the company. “[The cutlery companies of Solingen] were trying to get into the world market, and were competing with the bigger, more connected British firms who cornered the cutlery market exports,” says Miller. This led John S. Holler to open up a store in New York City. Like any good salesman, Holler needed a marketing plan. And since Twitter did not exist, the company was going to have to create a demo piece to showcase the its products and craftsmanship. This object, the one you see in the photos, would hang in a window or be displayed in a case when the company traveled around to world expos. So basically, this foldable knife is a very sharp and very dangerous catalog. Other companies made similar exhibition knives, but none were quite as stunning as the Holler piece. “Some were made in England, but not nearly as spectacular as this,” says Miller. “This is the finest one I’ve ever seen.”

“If you bring this knife to a gunfight, you’re OK.”

It’s hard to tell by photos alone, but this multi-tool is much larger than your typical Swiss Army knife. Its handle is about 10 inches long, 6 inches wide and 4 inches deep, which makes a lot of sense when you realize how many different types of blades have to fit into it. To start, there’s two dagger blades, a serrated bread knife, a few pairs of shears, a couple of saw blades, a corkscrew, a lancet (for boils?), button hooks, a cigar cutter (hey, why not!), mechanical pens and pencils, and even a piano tuning fork (whew). Really, the only thing the knife is missing is a bottle opener, since the bottle cap we know today wasn’t invented until 1892.

The tool weighs in at around 9 pounds, and with everything fully extended, the object reaches about a foot in diameter, which makes this much more a suitcase knife than a pocket knife. Miller says it takes about 25 minutes to fully open the gadget, and even when you take your time, it’s a dangerous task. “I’ve cut myself on that darn straight razor,” he says. The Smithsonian acquired the knife in 1986 after it was donated by James F. Parker. While alive, Parker was well known in knife collection circles—he owned his own cutlery company and served as the first president of the Knife Collectors Association. Miller says the first time he saw the object he couldn’t believe it was real. “I was particularly impressed with the revolver,” he recalls. “If you bring this knife to a gunfight, you’re OK.”