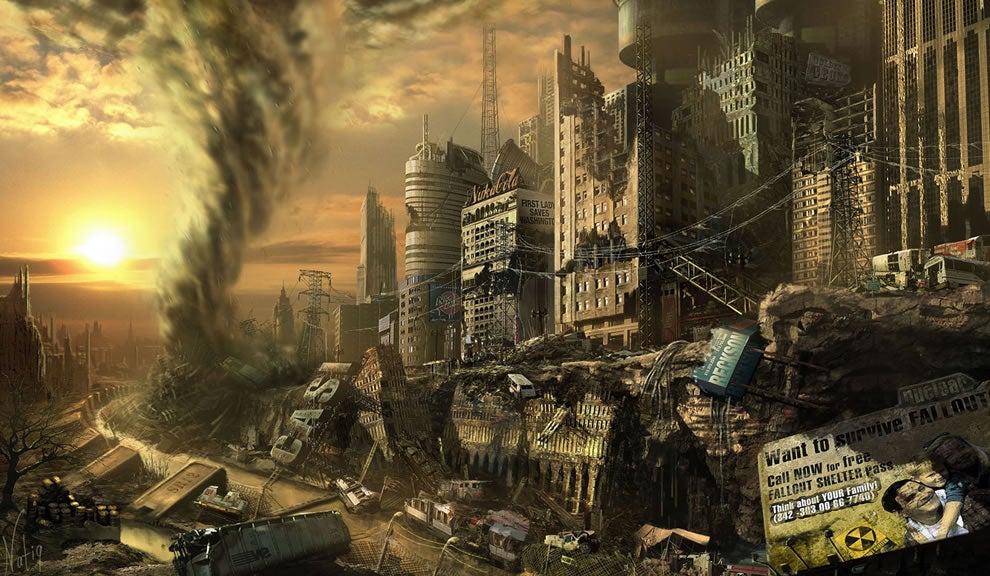 Terrorists have detonated a low-yield nuclear warhead in your city. How long should you hide, and where, to avoid the worst effects of radioactive fallout? We talked to Lawrence Livermore National Laboratory atmospheric scientist Michael Dillon to find out.

Yesterday Dillon published a paper on this topic in the Proceedings of the Royal Society A. He’s spent his career researching how the government should respond to disasters with an airborne component, whether that’s a chemical accident, an epidemic, or nuclear fallout. After poring over dozens of studies on how fallout behaves, and analyzing as many factors as possible related to urban detonations, he’s come up with a disaster plan that he hopes can be implemented by governments from the local to the federal level.

The best part of Dillon’s fallout plan is that it’s aimed at people like you and I, who won’t have access to information about wind direction and blast magnitude. It’s a plan that works even if all you know is that a nuclear bomb has gone off in your city.

This Is Not A Cold War Bomb

When I spoke to Dillon about his work, he was quick to point out that his disaster plan is still theoretical. Nobody has yet had a chance to study a low-yield nuclear blast in a real-world city — “thankfully, these are rare events,” Dillon said. But as the threat of a terrorist nuclear attack grows more likely than a Cold War scenario, it’s crucial for cities to have plans in place. And that means a major paradigm shift in how we think about nuclear attack.

The classic nuclear attack scenario that most of us imagine comes straight out of the Cold War — or movies like Terminator. Multiple megaton-class bombs go off all over the world. The results are catastrophic, with whole regions burned to a crisp, mass deaths, and a fallout plume that stretches hundreds of miles. But the scenario we’re more likely to encounter today involves bombs that are anywhere from .1 kilotons to 10 kilotons. They’re small compared to the bombs that leveled Hiroshima and Nagasaki, and infinitesimal compared to the warheads we had in our Cold War arsenals.

“These events are more like a Katrina-level disaster,” Dillon said. “Your city has the potential to survive, and that’s what we’re planning for.”

The chart below gives you a sense of the damage radius of the bombs that Dillon studies, as opposed to Cold War weapons. The worst damage occurs in the pink areas (psi stands for pounds-force per square inch, and is used to measure blast force). People inside the pink dotted line run the risk of getting pretty severe burns, and those outside are more at risk for doses of radiation and injury from fire or other blast damage. What’s most important, though, is that you can see the range of radiation danger is much smaller with today’s nuclear bomb threats. A 1 kiloton warhead will pose a radiation danger up to 2 kilometers away from ground zero. Compare that to a 10 megaton, Cold War bomb, which irradiates areas as much as 40 kilometers away.

So you can appreciate why a nuclear attack today doesn’t have to mean instant death for everyone around — and could even be something that your city would recover from. 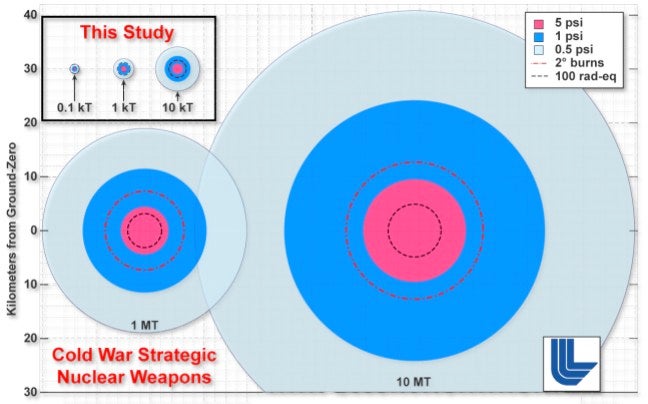 What To Do When the Bomb Goes Off

If the bomb goes off and you are unhurt in the initial blast, you need to worry about protection from radioactive fallout. Because we’re not in a Cold War world anymore, Dillon said, “You don’t need a specific fallout shelter to get the protection you need.” You just have to be aware of what kinds of buildings will provide adequate shelter and which won’t.

Emergency responders measure the effectiveness of a fallout shelter on the “PF” scale (you can see a FEMA guide about that here), but Dillon is assuming you won’t have PF numbers on all the buildings in your neighborhood. What you want to do is try to find what he calls “adequate shelter” in the first 30 minutes after the bomb goes off. What is adequate? Said Dillon:

Put as much mass and material weight between you and bomb as possible. Distance [from the blast] is good but weight — heavy things, concrete, large stacks of books, earth — those are good. Go underground, if you can get there. Again, you’re looking for concrete roofs and walls. Even just deep inside big buildings. A basement is the classic spot.

Think about your city. Where is the nearest adequate shelter to your home and your work? Is it a subway station? A library with thick concrete walls lined with books? Your basement? A large building with lots of interior rooms that are shielded by many walls? Dillon warns that you want to try to reach this place in 30 minutes, but don’t count on being able to drive there. Traffic may be at a standstill. Make plans that will allow you to walk or possibly bicycle to your adequate shelter.

Then the question becomes how long to wait in this shelter until it’s safe to go outside. In the movies, of course, we see all kinds of ridiculous scenarios, from people going outside within minutes to whole civilizations remaining underground for centuries. None of those are really accurate, said Dillon.

Your best bet is to stay until emergency responders come. Given that we’re talking about a low-yield bomb, which may have a blast radius of less than a mile, this isn’t a disaster that has taken out the nation’s power structure. Help will arrive soon. But let’s say nobody does come. Dillon says his personal preference would be to wait about 12-24 hours before going outside. But, he emphasized, “wait for emergency responders because they’ll help with an evacuation route.” You don’t want to jump out of your fallout shelter and walk right into the path of the radiation.

How Does Fallout Work?

My first reaction to Dillon’s advice was disbelief. I could be relatively safe walking out of a fallout shelter less than a day after the blast? The answer is yes, because the most immediate danger is from what’s called early fallout, which is comprised of radioactive particles that are heavy enough to fall within hours of the blast. They usually fall in zones fairly close to the blast, depending on wind direction and intensity.

Said Dillon, “It’s going to be falling for hours after the blast. These large particles are the most dangerous and have the highest levels of radiation. This is the stuff that’s going to make you physically sick immediately.” He contrasts the radiation sickness you can get from this early fallout to other kinds of illnesses, like cancer, that you can get many years after radiation exposure. Sheltering from fallout may not prevent cancer in the future, but it will prevent you from dying immediately of radiation exposure.

The other thing to keep in mind is that fallout isn’t a magical substance that floats everywhere and gets into everything. “There will exist a physical region that’s contaminated with highly radioactive particles,” he said. “After leaving the shelter, you want to exit that region.” That’s where emergency responders can help, of course — they’ll be able to tell you how to avoid that zone, and how far away to go. Certainly there are lighter fallout particles that can stay airborne for much longer than the early fallout, but those particles are not going to cause immediate radiation sickness — which is what you’re trying to avoid in the bomb’s aftermath.

Dillon added that the early, dangerous fallout also “decays really fast.” The “dangerous zone shrinks quickly, and it’s a lot safer to be outside in 24 hours” than it is an hour after the blast.

Our pop culture is still straining to catch up with a world where nuclear blasts result in a scenario more like Katrina than On the Beach. We’ve been trained to think of nuclear attack as the end of the world, but it’s like many other disasters: horrific, but something that we can survive. While we’re waiting for a movie that realistically depicts a low-yield nuclear attack in the post-Cold War era, we can start planning our real-life escape routes and shelters in the citiscapes around us. One day, that big ugly building downtown with the thick concrete walls could save your life.

Unless otherwise specified, all charts taken from the US national security staff publication Planning Guidance for Response to a Nuclear Detonation