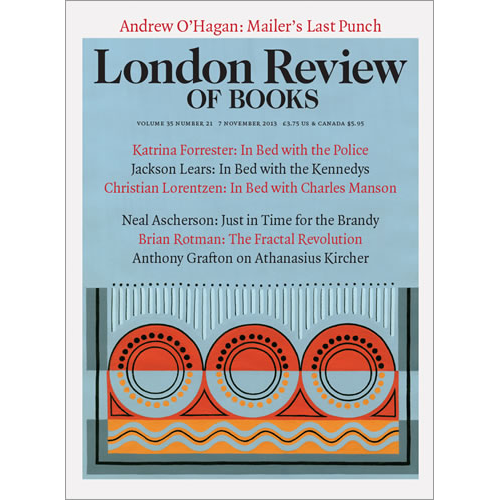 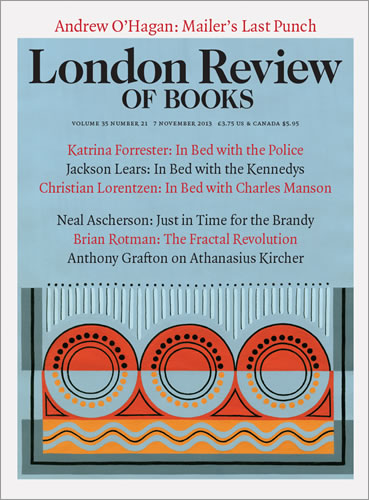 Andrew O’Hagan writes: ‘Joan Didion gave me her hand and she was so thin it felt like I was holding a butterfly’ (LRB, 7 November). A beautiful sentence, but I wondered about the simile’s plausibility. It’s been reported that Didion weighs less than eighty lbs. She’s so thin her doctors have put her on an ice cream diet to keep her mass up. A woman’s hand is said to be 0.5 per cent of her body weight. So if Didion weighs 75 lbs, her hand probably weighs about six ounces. The world’s heaviest butterfly, the female Queen Victoria Birdwing, weighs about two grams. There are about 28 grams in an ounce, and Joan Didion’s hand probably weighs about the same as holding 86 female Queen Victoria Birdwings. It would be difficult to hold them all in your hand because each one has a wingspan of 18 centimetres. The smallest butterfly in the world is the North American Pygmy Blue and you’d probably need thousands of them to tip the scales against one of Didion’s fingers. None of this is to detract from the loveliness of O’Hagan’s sentence. We tell ourselves stories in order to live.

Andrew O’Hagan quotes Norman Mailer telling him that his ex-wife Jeannie Campbell was Lord Beaverbrook’s daughter, before impersonating ‘the great English press baron at length’. Campbell was, in fact, Beaverbrook’s granddaughter. And Beaverbrook wasn’t English, but Canadian. Jeannie Campbell’s cut-glass vowels were a legacy of her childhood as the daughter of the Duke of Argyll (family name Campbell), who despite his Scottish heritage, spoke with all the haughty affectation of his class.

Neal Ascherson says he came away from Delville Wood with some green acorns (LRB, 7 November). Those acorns have a fascinating history. Following the Revocation of the Edict of Nantes a large number of French Protestants sought refuge among their Dutch co-religionists at the French Protestants. They carried vines with them, and also acorns from which to grow the oak they would need for winebarrels. The Huguenots are therefore credited with founding the South African wine industry; and many vineyards there bear the names of Huguenot families. In fact, the majestic oak trees that now dominate the South African national memorial at Delville Wood were grown from acorns that were brought back to France in 1920 from La Cotte, one of the original Huguenot plantations established in Franschhoek (‘French Corner’) in the Western Cape in 1688.

Reading Neal Ascherson’s ‘In Delville Wood’, I thought of a survivor of what Liddell-Hart called ‘the bloodiest battle hell of 1916’ named Bobby Grantham. I knew him when I was a boy. He had been gassed during the Battle of the Somme, and around 1948, he was living at the Hotel De Aar, managed by my father, in the middle of the Great Karoo. It was thought that the air there would be kind to his ruined lungs. A large oxygen tank always stood at the door of his room at the hotel.

I was also reminded of John Buchan’s 1919 novel Mr Standfast, which is dedicated to the South African 1st Infantry Brigade, butchered at Delville Wood. In its universe, Germans are without exception demonic or brutish; blacks are ‘niggers’; detours into anti-semitism spice things up. Putting all that poison in print didn’t stop Buchan from becoming Baron Tweedsmuir, an honorary fellow of Oxford University and governor-general of Canada, where he was eventually graced with a state funeral. And he evidently had a lovely Great War himself: he wrote speeches for Field Marshal Haig and then was appointed director of information under the British propaganda minister, Lord Beaverbrook. He was the kind of man who made the horrors of Delville Wood possible.

Stefan Collini writes that British business enterprises have a mixed record whereas British public institutions have a very good one (LRB, 24 October). The observation reminded me of an encounter at the beginning of the 1990s at a reception held at the British Embassy in Tokyo to promote British higher education. A commercial attaché gave a short speech about a new dawn for British universities: they would become more like British businesses, dynamic, healthy, enterprising, swift to adapt to market conditions etc. I had recently returned from several years’ teaching in an American university and was astonished and embarrassed by this guff. Afterwards I struck up a conversation with a polite and reserved Japanese academic. It emerged that he held a chair of pathology at the University of Tokyo, and had special responsibility for determining the exact cause of death of members of the imperial Japanese family. ‘Your universities,’ he said later, after we’d had quite a few drinks, ‘they will follow British business model? But British business is … I am sorry … it is not well. It is dead, and your universities are famous and respected. They are not dead.’

Stefan Collini’s article on higher education in Britain prompts much useful reflection on parallel developments in our children’s schooling and in our increasingly privatised NHS. Just one question: the career of Roger Brown, author of Everything for Sale?: The Marketisation of Higher Education, is given in some detail, but nothing is said of Helen Carasso, with whom he wrote the book. Did she just make the tea?

Richard Overy points to ‘an irony’ that Rommel, who had excelled as a mobile commander in 1940, was called upon to execute Hitler’s wishes for a fixed forward defence on the Channel coast in 1944 (LRB, 10 October). Not really: Rommel had learned in the interim what Allied air superiority could achieve, and feared that armoured reserves stationed in depth would be destroyed on the march up to wherever the Allied landings came. He wrote to Jodl, chief of staff of the Wehrmacht, to this effect in April 1944. In this connection, incidentally, one way to distinguish photographs of the German army in the early war years from those of the later period is that, in the later ones, the armoured vehicles are generally festooned with boughs and foliage as an air-defence precaution.

Thank God for the Leavisites

T.J. Clark was lucky in the two Leavisite teachers who taught him in grammar schools in Lancashire and Bristol (Letters, 10 October). I was not so lucky in my tutor at King’s College London, just down from Cambridge and an ardent Leavisite. She reduced my tutorial mate to tears by pouring withering scorn on her admiration for Dylan Thomas, bad-mouthed our head of department, Geoffrey Bullough, and told us music was a waste of time, presumably because it could not be spelled out in what she took to be Leavisian critical language.

Dominic Dromgoole and Clive Stafford Smith understandably refrain from applauding the Guantánamo force-feeding of mentally competent hunger-strikers (LRB, 7 November). But, before we claim any superiority, we should remember that for the last 13 years Ian Brady has been the victim of the same treatment in Ashworth Hospital with the explicit approval of our judiciary, confirmed by Mr Justice Kay on Brady’s judicial review of the decision.

Tristram Stuart’s piece brought back memories of my father’s beekeeping in the 1950s (LRB, 24 October). Our aunt also kept bees in her garden in West Hampstead and would drive them to Kent for the summer. Our first colony arrived in a buzzy metal mesh box courtesy of Carter Patterson. We had two swarms – one onto a pear tree in our garden in Woodford and another into a neighbour’s garden. We retrieved both and added them to our growing collection of hives. As we understood it at the time, ancient common law allowed pursuit of a swarm over private land, and no prosecution for trespass could be brought against a beekeeper keeping his swarm in sight.

Please include name, address, and work and home telephone numbers.